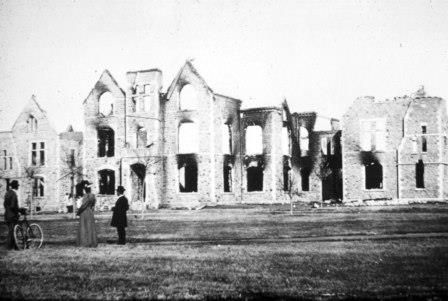 University of South Dakota President Joseph W. Mauck posted a message to students in front of blackened walls on Oct. 15, 1893:
“The loss of University Hall by fire this morning affords an occasion for the fullest exercise of your ‘Collegiate Spirit,’ and an exhibition of that loyalty which I have from time to time urged as due from you to your State and its University.

“Every student is expected to stand steadfastly by the institution in this its day of trial. Let no one entertain the thought that the University will be closed. Classes will meet, without break, at places designated in a notice to be posted in front of the smoking ruins …”

University Hall, also known as Old Main, was the first building of higher public education constructed in Dakota Territory. As it housed all the classes offered by USD, its loss meant relocating classes and the destruction of valuable materials.

According to “The University of South Dakota 1862-1966” by Cedric Cummins, not a student was absent when classes resumed without missing a day. Classes were divided between the university’s two other buildings, and local churches were used to some degree.

Vermillion’s Dakota Republican newspaper reported in its Dec. 28, 1893, edition that the university had received a large number of contributions the previous week. The donations included a complete set of hymnals, text and reference books, two cases of birds and animals from the New South Wales’ exhibit at the World’s Fair and a slab of highly polished Arizona petrified wood from the World’s Fair.

“Besides this, the South Dakota Building at the World’s Fair has been torn down, and several carloads of lumber, stone, iron, etc., are en route to Vermillion to be used in reconstruction… The correspondence of President Mauck with outside parties is bringing in several contributions and ere long the university will again be fully equipped,” concluded the article.

Classes were back in the main building at the start of the winter term in January 1895. Construction of Old Main was completed in August 1899, according to Cummins.

Mauck left USD in 1897. According to information from USD’s website, “Mauck’s term proved to be a stabilizing and optimistic force for the university. President Mauck’s six years at USD represented a period when South Dakota’s high schools were developing better standards and curriculums for admission to institutions of higher education. Only a small number of students were prepared to enter the freshman class, and to compound matters, the legislature was providing limited support to the university. The amount of courses at USD increased but with an undermanned faculty. Mauck never faltered under these discouraging factors.”