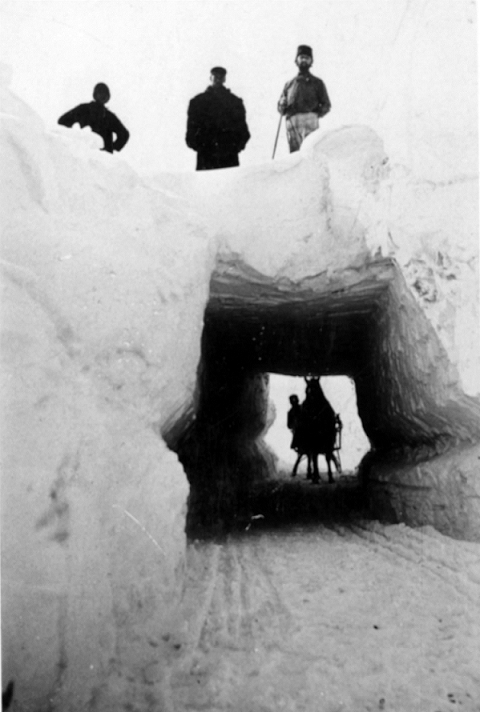 The Weather Channel began assigning names to big snowstorms in 2012. A blizzard that blasted the Midwest on Jan. 12, 1888, was so destructive that it acquired several names: “The Children’s Blizzard,” “The Schoolchildren’s Blizzard” and “The Schoolhouse Blizzard.”

The morning felt more like April than January: warm, calm and clear.

Oscar Coursey, three of his siblings and their schoolmates were at recess the morning of Jan. 12, 1888, outside the schoolhouse near their homestead in southwestern Beadle County, playing in their shirt sleeves, without hats or mittens. “Suddenly, we looked up and saw something coming rolling toward us with great fury from the northwest, and making a loud noise,” Coursey wrote in Pioneering in Dakota. “It looked like a long string of big bales of cotton, each one bound tightly with heavy cords of silver, and then all tied together with great silvery rope.”

All the children had just gotten inside the schoolhouse when the storm struck with such force that it nearly moved the building off its cobblestone foundation.

George Duernberger had taken his horses to a well about one-half mile from his homestead in Faulk County when one of the horses jerked the halter rope from his hand and started for the barn. A hurried glance to the northwest showed him a gray bank.

“Then the wind came. Everything was blotted out, and the trail disappeared, the horses’ heads were not visible … It was difficult to breathe and utterly impossible to keep my eyes open against the driving snow … The cold was piercing,” according to Duernberger’s account in The South Dakota Historical Society’s bulletin The Wi-Iyohi.

A brief break in the storm enabled him to recognize a landmark and realize where he was. He was able to get his horses in the barn and start for the house. He was guided to the house by the sound of his wife blowing on a trumpet.

“It was but eighty minutes since I had left for the well. An eternity, however, had elapsed.”

Sadie Shaw wrote her brother and sister that the wind knocked her down when she attempted to go to the coal box about a rod (about 5.5 yards) east of her sod house in the Platte/Geddes area. Her husband had gone to get their children from school when he realized a storm was coming. He returned home safely after being in the storm for about an hour, unsuccessful in his attempt to reach the schoolhouse.

“Oh the agony of that hour no one can tell,” Shaw wrote in her letter contained in 900 Miles from Nowhere: Voices from the Homestead by Steven R. Kinsella. “The storm grew wilder colder and thicker every moment until it seemed to breathe nothing but Death and Death inevitable in its every gust. You could not see 3 feet from the window at times and not 6 feet ahead all day.”

A combination of gale winds, blinding snow and rapidly dropping temperatures made the storm dangerous. The Signal Station at Huron reported that the wind averaged 45 to 50 mph, with gusts up to 60 mph. The temperature fell from 20 degrees at noon to 17 degrees below zero at 10 p.m., further dropping to 28 degrees below zero during the night.

The storm abated early on Jan. 13. Shaw’s husband went for the children and found them all safe.

Others were not as fortunate.

The Wi-Iyohi listed the names of 178 people who perished in the blizzard in South Dakota. Many who lay dead on the prairie were children who were caught on their way home from school. In The Children’s Blizzard, author David Laskin states that about 500 people in the Dakotas, Nebraska and Minnesota perished in the storm.

Coursey was one of the fortunate schoolchildren, as his teacher kept her flock of pioneer children in the schoolhouse while the storm raged and into the long, cold night.

In the morning, the teacher saw that the storm had died out, took the schoolchildren to her nearby claim shanty, fed them and sent them home.

Coursey sat by his mother’s bedside when she died in September 1914. “The last thing she said to me before she passed away was this: ‘Son, you will never know the burden that was lifted from my heart the next morning after the Big Blizzard, when I looked out and saw you four older children scampering home over the snow-drifts, when I was positively sure you had all perished in the storm.’”