February 2018-A Jewel in the National Park System 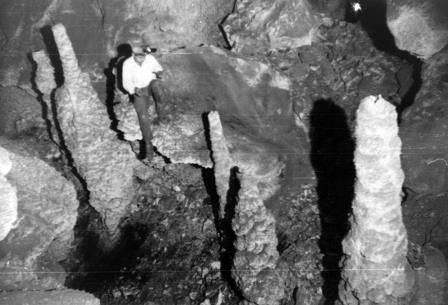 “This is a small cave,” read the sign outside Jewel Cave.

“It was fun to prove that wrong,” said Jan Conn in a telephone interview.

Jewel Cave is currently known to be the third-longest cave in the world, at almost 200 miles, thanks in part to Conn and her late husband, Herb.

When the Conns began exploring Jewel Cave in 1959, less than 2 miles of passageway had been discovered, according to the National Park Service.

Brothers Frank and Albert Michaud are credited with discovering the cave in 1900, according to the NPS. They were prospecting for minerals in Hell Canyon when they felt cold air blowing out of a small hole. They dynamited the entrance to make it larger and explored the cave. The cave is named for its calcite crystals, which sparkle like jewels. The Michauds intended to make a living off Jewel Cave by mining it and by developing it as a tourist attraction. Neither endeavor was a financial success.

The Conns grew up on the East Coast and had established many classic rock climbs in that region before moving to the Custer area because of the excellent quality of rock climbing in the Needles.

In the fall of 1959, Dwight Deal, recent college graduate and a member of the National Speleological Society, asked the Conns to join him to explore, survey and map Jewel Cave. Deal moved away from the Black Hills in 1961, but by then Conns became fascinated with exploring what was below the earth’s surface instead of climbing the peaks above it.

While exploring Jewel Cave was not particularly dangerous, people must always be alert when surveying and mapping a cave, Conn said.

Exploration involved little walking, but instead climbing up chimneys between the crystal-coated walls and crawling in tight places, she said.

When exploring, cavers make their way to where the previous surveying ended and continue from there, marking the new boundary and then returning to their starting point. Most explorations are now four-day camping trips.

“Each trip gets a little bit harder and longer than the last one,” Conn said.

The excitement of not knowing what they would find drew them back to Jewel Cave time and time again, she said.

“To us it was the excitement of exploring and being where no one else had gone before and not knowing what you’d find around the next corner,” Conn said.

The Conns recorded their experiences as pioneering spelunkers in the book “The Jewel Cave Adventure: Fifty Miles of Discovery Under South Dakota.” First published in 1977, a new edition with color photographs will be published this summer by the Black Hills Parks and Forests Association.

Instead of going down into a cave, the Conns went down in South Dakota history in 2011 when they were inducted into the South Dakota Hall of Fame.

Herb died in 2012, but Jan continues to make her home near Custer.

As for Jewel Cave, Conn is pleased that a third generation has continued to explore, survey and map the cave “not just for fun, but to find out where the end is.”

Of the 417 park sites in the National Park Service, Jewel Cave is one of a handful whose end is not known, according to Bradley Block, chief of interpretation at Jewel Cave National Monument. Arguably one of the last frontiers for exploration, it is estimated that only 3 to 5 percent of the cave has been discovered.

Its length rather than its formations is what makes Jewel Cave amazing, according to the NPS.

Visitors to the national monument can see some of the treasures that lie below ground by taking the easy 20-minute Discovery Talk, the moderately strenuous Scenic Tour, the strenuous Historic Lantern Tour or the Wild Caving Tour which is considered one of the most strenuous tours available in the National Park Service.