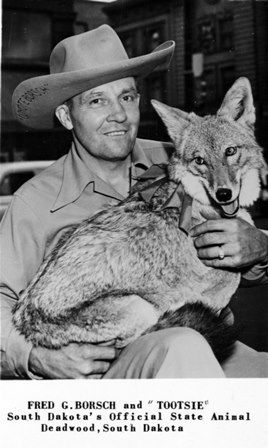 In 1949, the South Dakota Legislature designated the coyote as the state animal, despite a legislator who recommended the bull instead.

The word “coyote” has been traced back to Mexican Spanish, around 1759. Coyotes can be found in almost all the North American continent, from Alaska to Central America.

The coyote has a long history in South Dakota.

In American Indian folklore, the coyote is often cast as a trickster and deceiver.

“American Indian Myths and Legends” contains a story about a coyote from Jeremy Leading Cloud of the Rosebud Indian Reservation. The coyote took off the thick blanket he was wearing and put it on the rock, Iya, to keep the rock from freezing. Coyote soon grew cold and wanted the coat back, but Iya would not give it to him, saying, “What is given is given.” Iya became a big rock, crashing upon the coyote and flattening him. The story has a moral, and it is: Always be generous in heart. If you have something to give, give it forever.

Those in the Lewis and Clark Expedition referred to coyotes as “prairie wolves.” On Sept. 18, 1804, near the White River in what is now South Dakota, William Clark wrote, “I killed a Prairie Wolf, about the Size of a Gray fox, bushy tail, head and ears like a Wolf, Some fur, Burrows in the ground and barks like a Small Dog. What has been taken heretofore for a Fox was those Wolves …”

The name coyote has even been applied to the people of South Dakota. This originated in the fall of 1863, when a horse owned by members of Co. A. Dakota Cavalry beat a horse owned by a major in the 6th Iowa Cavalry in a race at Fort Randall. It was said the Dakota horse ran like a coyote, and its owners at once gave the horse that name, which almost immediately afterward was applied to the entire Dakota Company.

In 1924, a coyote standing on a wreath was approved for the crest of the South Dakota Army National Guard. The Guard’s training exercises are called the Golden Coyote. The South Dakota Air National Guard is nicknamed the “Lobos.” “Lobo” is Spanish for wolf. The wolf, coyote, fox and domestic dog are all members of the biological family Canidae.

The mascot of the University of South Dakota is Charlie Coyote. When the school’s first yearbook was published in 1902, the editors had already dubbed its athletic teams “the Coyotes.” A bronze statue of a coyote is located on the USD campus.

The coyote has been called the most vocal of North American wild mammals. A coyote known for her singing skills was Tootsie. Fred Borsch, who owned a liquor store in Deadwood, was given a coyote pup in 1947. He named the pup Tootsie and taught her to howl as he sang. The two cut a record called “South Dakota Tootsie.” The duo often appeared in parades and events in Deadwood. On Aug. 6, 1949, Gov. George T. Mickelson declared Tootsie South Dakota’s Official Animal at the Days of ’76. At the height of their fame, Borsch and Tootsie took a 10-day tour that included a visit to the White House. Tootsie died in 1959, but she still lives on in Deadwood. A giant neon sign of a howling coyote is located on historic Main Street near the original location of Freddie’s Spot Liquor Store and a display about Tootsie can be seen at the Adams Museum.

Not all coyotes are as fortunate as Tootsie. Although honored as the state animal, a bounty has often been placed on coyotes’ heads. The coyote has been blamed for many dead calves or lambs on the prairie, and for missing dogs and cats. Efforts to reduce the coyote population in western states through poisoning, trapping and bounty hunting have not had much effect, as wildlife officials found that 70 percent of the entire population had to be killed every year to make a dent in the numbers. Coyotes have a biological mechanism that triggers larger litters whenever their numbers drop.

The coyote’s ability to adapt is one of its greatest skills. The coyote can change its breeding habits, diet and social dynamics to survive in a wide variety of habitats.

That resilience is why the coyote was adopted as South Dakota’s official state animal.

“The coyote has managed to get along in the face of civilization that is encroaching upon him,” State Sen. Alfred Roesler told his colleagues in 1949. “Again, you might say his spirit to survive is a lot like the citizens of South Dakota who have gone through adverse conditions.”