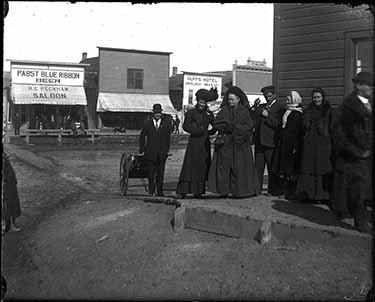 Deadwood was the wickedest city in America and Aberdeen had fewer righteous people in it than Sodom and Gomorrah.

Such were the beliefs that South Dakota newspapers attributed to prohibition activist Carry Amelia Nation. Nation, 1846-1911, was already famous for her hatchet-wielding, saloon-smashing activities when she came to South Dakota, first presenting her lecture “For God and Country” in Madison on Jan. 1, 1910. She went on to speak at several other locations throughout the state that year.

“Speaking forth a strong denunciation of the saloon, of republicans, tobacco users, democrats, members of the Masonic order and of all forms of vice, Mrs. Carrie Nation delivered an address Wednesday evening in the opera house before an audience of about two hundred,” stated an article attributed to the Huronite that appeared in the Jan. 6, 1910, Philip Weekly Review. “Mrs. Nation spoke mostly of her experience as a ‘saloon smasher’ and of the course and reasons which impelled her to follow such a course in attacking that institution. At no time during her discourse did she display any hesitancy in speaking out her opinion, and she spared neither ‘saint nor sinner’ from her onslaughts.”

Nation’s efforts to get alcohol banned may have stemmed from quickly realizing after her marriage in 1867 to Charles Gloyd that he was an alcoholic.

Gloyd died in 1869 and Carry married David Nation, a journalist, lawyer and preacher 19 years her senior in 1874. David Nation divorced her in 1901 on the grounds of desertion. After the Nations moved to Medicine Lodge, Kan., in 1889, Carry began her temperance work by organizing a chapter of the Woman’s Christian Temperance Union, the most active group favoring the prohibition of alcohol.

Nation wrote in her autobiography that she “told the Lord to use me any way to suppress the dreadful curse of liquor.” That “way” resulted in Nation going to Kiowa, Kan., in 1900, walking into saloons and smashing bottles of liquor, mirrors and other bar fixtures.

She continued her destructive tactics, attracting attention to herself and her cause. A hatchet became her preferred instrument of destruction, and she came to call her bar smashings “hatchetations.”

By the time Nation arrived in South Dakota, newspapers reported she had decided that the spoken word was mightier than the hatchet. She had given up smashing saloons in favor of lecture tours.

To raise money, Nation sold copies of her autobiography, pictures of herself and miniature souvenir hatchets.

While most newspaper accounts spelled Nation’s first name as “Carrie,” the spelling “Carry” was used by her father in the family Bible. Nation told an audience in Centerville that “her name was not an accident, but the divine plan of God pointing out her life work to ‘Carry A Nation’s’ burdens on her mind and heart, and use her talents for the world’s betterment.”

Standing 6-feet tall, Nation must have presented a formidable presence when she lectured. The Lead Pioneer-Times described her as “Attired in a dress of dark material, and a little old-fashioned cap to match, with a touch of white lace at the throat in contrast … Her eyes flash fire from behind the steel-bowed spectacles as she gives an audience the benefit of her observations.”

While at Lemmon, Nation was a guest at a wedding. Nation fastened a “hatchet” on the bride and groom when congratulating the couple, “accompanying the act with appropriate remarks, urging them to ‘carry a nation’ for righteousness,” reported the State-Line Herald.

Nation was often greeted with large crowds, curious to hear what the famous speaker had to say. While lecturing in Huron, she called President William Howard Taft “that rotten piece of meat at Washington.”

She had her detractors, though.

“Carrie has a habit of consigning every one to h-ll but herself, and she must be anticipating a lonesome career through the eternal ages,” noted the Citizen Republican in Scotland, S.D.

In Yankton, college boys sang drinking songs as the curtain went up at the opera house in which she spoke.

The Union County Courier in Elk Point noted, “She is worth seeing and hearing, but converts and convinces no one. She is an extremist, makes bold and unsupported assertions and is rightly regarded as a freak.”

Nation spoke out against many things, but she was an advocate for woman suffrage and the rights of the poor and homeless.