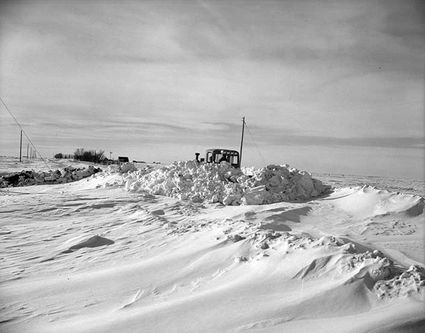 A blizzard is more than just a storm: it can bring with it fear, sorrow, loss, cold, hunger and a place in the history books.

Elizabeth Bacon Custer had been told that the climate of Dakota Territory was “eight months of winter and four of very late fall.” She probably felt that statement was only slightly exaggerated when she, her husband, Gen. George Armstrong Custer, and the 7th Cavalry arrived in Yankton, Dakota Territory, in April 1873. Soon after they arrived, the air grew chilly, the sun disappeared, and rain began to fall. The storm turned into a blizzard.

“The air was so thick with the whirling, tiny particles (of snow) that it was almost impossible to see one’s hand held out before one. The snow was fluffy and thick, like wool, and fell so rapidly, and seemingly from all directions, that it gave me a feeling of suffocation as I stood outside,” Custer wrote in “Boots and Saddles.”

“In All its Fury” contains accounts of a blizzard that struck on Jan. 12, 1888. One of the stories is that of O.H. VanDyke. He was on his way to his farm eight miles south of Woonsocket with a load of coal when the storm hit. He turned his horses loose and burrowed into a snowbank with less than a foot of snow covering him for protection.
“To think that any person could live in a hole like that, with the thermometer standing at 35 below zero, seems unbelievable. Such is the case, however. I was dressed just warm enough for ordinary weather. So I lay there, tried to pray and sing, and even punched myself to keep awake,” VanDyke recalled.

When he finally crawled out of the snow, his feet were frozen and his clothes were as stiff as boards. Having no choice but to try to walk to safety or perish, VanDyke made his way to a farmhouse. A doctor was able to save all but two toes on his left foot.

Others were not as fortunate as VanDyke.  About 178 people in South Dakota perished in the blizzard, according to the monthly bulletin of the South Dakota State Historical Society.

The blizzard of Jan. 12, 1888, was dubbed the “Children’s Blizzard” due to the high proportion of children numbered among the storm’s victims.

A storm that struck the afternoon of Monday, Jan. 21, 1952, also affected children.

“It struck the Rosebud country so suddenly that many teachers and their pupils were marooned at the school houses or nearby homes for the duration of the storm.

Occupants of stalled cars on the highways sought shelter in the nearest farm home or sat it out in the cars the full thirty hours or more,” wrote Ethel L. Hellman in “Blizzard Strikes the Rosebud.”

Forrest Huddle, a rancher in southwest Tripp County, found cattle caught in fence corners and along fence lines and frozen. The breathing of the cattle formed a heavy coating of ice on the lower and upper jaws, which caused them to smother.

While making an aerial search for missing neighbors, Huddle could see dead cattle strung for nearly five miles and estimated 100 dead. Cattle continued to die for the next few days.

Mrs. W.E. Farran shared a story in “Blizzard Strikes the Rosebud” about her son, Robert. On the second day of the storm, Robert left home at 9:30 a.m. to check on cattle about three miles away from their house. He found 40 dead. He had not returned home by noon. Feeling that Robert was near, his father went into the yard and saw Robert walking right on past the house, his face a solid mass of ice.

“Nine of our cattle died later. We have fifteen head left. But we have much to be thankful for – our son made it home,” Mrs. Farran wrote.

Hellmann also compiled stories of people’s experiences in a storm 14 years later that was rated as the worst in the history of the Dakotas. The storm swept into western South Dakota on Wednesday, March 2, 1966, and continued across the state until Saturday, March 5.

The Eagle Butte News reported, ”At the end of the three day storm, we had received approximately 30 inches of snow, with winds up to 80 miles per hour. Most of the time, it was virtually impossible to see even across the street. Many people were snowed in their homes, that is, snow was piled so high in front of doors that it was impossible to get out without going through a window, or calling upon outside help to shovel them out. Nearly all streets in town were blocked with drifts up to fifteen feet high.”
Mrs. S.S. Long of Timber Lake’s account of the storm in “Dakota Blizzards of 1966” told how the storm splintered the limbs on their 50-year-old grove of trees. She felt they fared better than many neighbors, whose barn roofs caved in under the weight of snow.

She concluded her account with, “We have been here since 1910 and have gone through numerous blizzards but we hope we or none of our neighbors will see one like it again.”

But despite our most fervent wishes, winter in South Dakota usually brings with it a blizzard or two.