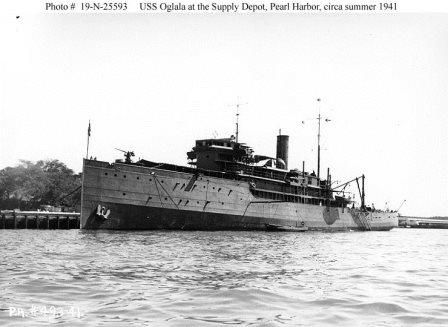 Of the ships and service craft moored at Pearl Harbor on the morning of Dec. 7, 1941, one had connections to South Dakota.

The Oglala had started life as a coastal passenger vessel, carrying people between Boston and New York. The vessel was built in 1906 or 1907 by the William Cramp Shipbuilding Company of Philadelphia with the name Massachusetts. The vessel was taken over by the Navy in World War I and converted to a minelayer with the name USS Shawmut. At the end of the war, the Shawmut was converted to a seaplane tender. On Jan. 1, 1928, the ship was again converted into a minelayer and renamed the USS Oglala.

“This name was selected by President (Calvin) Coolidge in recognition of the honor paid him by the Oglala Tribe in making him a chieftain,” wrote J.V. Ogan, Captain, U.S. Navy, Commanding, in a 1950 letter to a boarding school at Pine Ridge.

Coolidge and his wife, Grace, spent the summer of 1927 in the Black Hills. While in South Dakota, the president was adopted as an honorary member of the Sioux tribe in recognition of his support for the Indian Citizenship Act of 1924, granting full U.S. citizenship to American Indians and permitting them to retain tribal land and cultural rights.

On a Sunday morning 76 years ago, the Oglala was moored alongside the cruiser USS Helena at Pier Ten-Ten in the Pearl Harbor Navy Yard near Honolulu, Hawaii. Among those on board were Rear Adm. William R. Furlong, commander of the minecraft battle force, and Seaman First Class Loren Bailey.

Bailey had eaten breakfast in the mess hall and was about to complain that one of his records was being played on the record player with a scratchy needle when he heard that a fire had been spotted at nearby Ford Island. General quarters sounded, calling all on board to go to battle stations as quickly as possible. This was about 7:57 a.m.

“As I started down the starboard side (right-hand side as one faces forward) of the ship, I noticed three airplanes. I paid no attention to ’em because there was all so much activity. I thought it was just planes off an aircraft carrier. I saw the red insignia and it never dawned on me,” Bailey said in an oral history interview conducted on Dec, 3, 1986, by the National Park Service.

Bailey said he saw one of the planes in what would be the first wave of Japanese torpedo planes to reach Pearl Harbor drop a torpedo, which passed under the Oglala and slammed into the USS Helena. The pressure from the explosion ruptured the lower port (left) plating abreast of the Oglala’s fireroom, and the minelayer rapidly took on water.

By this time, the planes were starting to drop torpedoes on the battleships, Bailey recalled. He crossed the gangplank onto the Helena, where he passed ammunition for the Helena’s guns during the attack.

Smoke was everywhere around him, and Japanese planes were flying over the top of a nearby Navy yard building.

“I did not see the Arizona blow up, but I saw it burning profusely. I did see a lot of explosions near Ford Island. I observed them. And the battleship Nevada got underway,” Bailey said. “I can’t actually say I was scared. I was probably more surprised and amazed. We couldn’t comprehend the thing, it probably soaked in like two or three days later.”

Right after the attack, Bailey was put on a motor launch to pick up wounded and the dead. He was reassigned to a destroyer, the USS Tucker.

None of the crew of the Oglala were killed in the attack, although three were injured.

When it became clear that the Oglala might sink, Furlong ordered that the minelayer be moved away from the Helena so it would not pin the cruiser against the dock. About two hours after receiving the initial damage, the Oglala sank.

Initially evaluated as a total loss, the Oglala became the object of a prolonged and ultimately successful salvage effort.

The Oglala was returned to service in 1944 and sailed to the South Pacific for duty. The Oglala was decommissioned in 1946 and transferred to the Maritime Commission. It remained with the “mothball fleet” for almost two decades before being sold for scrap in 1965.