August 2020-The Helpers of Helpless Children 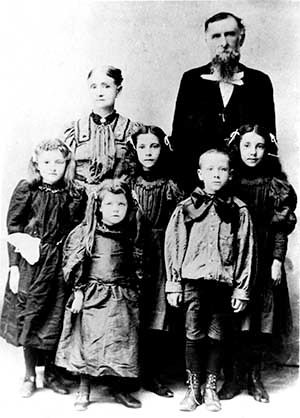 “Rich in deeds of charity, poor in purse, but a millionaire in noble achievement.”

That tribute to Elizabeth Sherrard that appeared in the Sioux Falls Argus-Leader upon her death in 1908 applied equally to her husband, William. The couple devoted their lives to service to others.

Elizabeth Hazelton Bixby Sherrard was born in 1829 in New York. She married Edmund Bixby, a civil engineer and surveyor, in 1851 and moved to Chicago. They had one son. In the 1850s she tended cholera victims and, later, wounded Union solders. After Edmund’s death in 1867 she worked on behalf of Chicago’s poor and met William Bird Sherrard.

Sherrard was born in 1837 in Ireland. He left Ireland in 1864 and came to Chicago, where he became superintendent of the Newsboys’ and Bootblacks’ Association, an organization designed to help homeless young boys who hawked newspapers and otherwise tried to beg, earn or steal enough money for food and shelter.
Elizabeth and William married in 1869.

“The marriage was an ideal one. Both husband and wife were devoted to the cause of helping humanity,” stated the Argus Leader.
In the 1880s, the Sherrards homesteaded in Clark County and began their work helping orphaned, neglected and homeless children, taking the children into their own home and caring for them only long enough until families could be found for them.

The Sherrards later agreed to move to Sioux Falls, with William as superintendent and Elizabeth as assistant of what would later be called the Children’s Home Society of South Dakota. The first five children arrived on Feb. 16, 1893. William was 55 years old and Elizabeth 63.

Elizabeth fed, clothed, bathed, soothed, counseled and otherwise tended to the needs of the children. The children were educated and taught manners.

William raised money for the Home, located children in need, sought out new foster and adoptive homes, and spent many hours in courtrooms on behalf of ill-treated children. The Sherrards were also integral in writing the first child protection laws for South Dakota, which were passed by the South Dakota Legislature in 1897, according to the Children’s Home Society’s website.

William brought attention to the Home’s needs through a four-page monthly publication called “The Children’s Friend.” In it, he asked for money, food, blankets and other items that Elizabeth required, listed contributors and subscribers, provided case histories of individual children and published information about children available for adoption. The subscription price was 25 cents a year for 12 issues.

The Madison Daily Leader on Oct. 28, 1893, reported, “In his new paper, ‘The Children’s Friend,’ for October, Supt. Sherrard of the Children’s home in Sioux Falls says of that institution: the first children were received February 16. Since then seventy-seven have been received, sixty-two placed in homes, two have died, leaving thirteen in the home at this time. These vary in age from two weeks to twelve years.”

Accounts of William’s work frequently appeared in South Dakota newspapers. On Aug. 7, 1894, the Madison Daily Leader reported, “Supt. Sherrard, of Sioux Falls Children’s home passed north to Brookings, whence he goes to White to look after a little girl who was abused by a jeweler and wife. Mr. Sherrard is doing a noble work in this line, having found homes for four children during the past week.”

The Madison Daily Leader reported on Dec. 10, 1906, “Mr. Sherrard goes out tonight to Alexandria after a little six-year-old motherless boy … There are now thirty-five children in the Home, and the management would like to engage a woman for a month or two to assist in their care and ‘keep school’ a few hours each day.”
Elizabeth had been the foster mother of more than 1,300 children when she died at the Home on May 21, 1908, reported the Sioux Falls Argus-Leader.

“No one can say how much good one does who saves one child from a bad environment. Mrs. Sherrard has devoted her whole life to child rescue, and no one can say in set phrases and cold figures how much good this gentle, frail, devoted and gray-haired woman has done,” the Argus-Leader stated.

William was grief-stricken at his wife’s death and resigned before the year was out. He moved to Long Beach, Calif., where he died on Jan. 4, 1916.

One of the first pieces of artwork in the South Dakota Capitol honors Elizabeth. A bronze bas-relief sculpture depicting Elizabeth bathing one infant with two more at her feet was hung near the governor’s office in 1913.