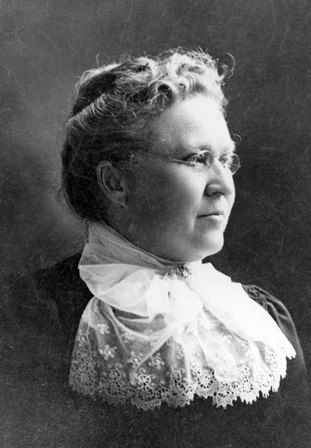 Mary Collins’ commitment to the people of the Standing Rock Reservation and their appreciation of her delivered to the generations a masterpiece of American Indian sculpture.

The Sioux Horse Effigy is a three-foot-long carved horse dance stick that is the crown jewel of the museum of the South Dakota State Historical Society at the Cultural Heritage Center in Pierre.

Collins donated the effigy and other artifacts to the South Dakota State Historical Society in 1920. The effigy was recently part of an international exhibit. Events celebrating the effigy’s return to the Cultural Heritage Center will take place Oct. 10-12 in Pierre. For a schedule, visit www.history.sd.gov.

“Miss Collins was a distinctive type of philosopher,” stated an article in “The Tomahawk,” a newspaper of the Minnesota Chippewa, published a few years after Collins’ death. “She was first a teacher in the schools in Keokuk, Iowa. After three years of this work she decided there were others who could fill her place there, and she was more fitted to a life on the frontier. Therefore, in 1875, she left for Dakota territory as a missionary to the Sioux Indians.”

The 29-year-old Collins was assigned to the Oahe Mission, established by Congregationalist minister the Rev. Thomas L. Riggs, and his first wife, Cornelia “Nina” Riggs, on the east bank of the Missouri River at Peoria Flats, north of what is now Pierre.

As Collins traveled by horse-drawn wagon from the Dakota Territorial capital of Yankton to the Oahe Mission, she noted, “I began to realize the isolation and the loneliness which it was possible for the years to bring. But ‘I had put my hand to the plow.’ The first year for a Missionary is the hardest to endure: Adjusting oneself to such a different environment, not only of people and things, but of the country, climate and even to one’s own room.” Collins comments are contained in her autobiography in Volume 41 of the “South Dakota Historical Collections” compiled by the South Dakota State Historical Society. Her autobiography can also be found in the South Dakota Digital Archives collections.

At the mission, Collins taught children in the morning and visited families in the afternoon.

>p?“We taught in the Dakota language at the same time we were learning it,” Collins wrote in her autobiography.

To carry on his work west of the Missouri River, Riggs built out-stations where workers could hold church services. In 1885, Collins was assigned to an out-station on the Grand River near Running Antelope’s village. The name of this out-station was later changed to Little Eagle.

“It was a hard, long winter,” Collins wrote. “I was living in a room about fourteen by twelve feet and all my worldly possessions were in there. A large room was used for the church services and school room and office.”

Collins would often travel with her team of horses over a large region to visit American Indian families. According to an article by her niece Ethel Collins Jacobsen published in the monthly bulletin of the South Dakota State Historical Society, Collins gave religious instruction, advice, and visited and helped the sick, all the while conducting weekly services at the mission building.

Her ability to speak the Lakota language, her understanding of the Lakota’s needs and her knowledge of simple medical remedies made her popular among American Indians.

“The people had so long been without any one to help them in time of trouble that I was always greeted with the warmest kind of reception and often when passing through a village when on a journey have had people sick brought to me,” Collins wrote in her autobiography.

The American Indian Chief Sitting Bull was one of her neighbors. The two became friends.

In the introduction to Collins’ autobiography, Richmond L. Clow wrote that Collins eventually came to better understand American Indian beliefs and traditions. She became less harsh toward American Indians and more critical of the government’s policies regarding them.

She joined national reform movements and traveled throughout the country giving lectures, working to better conditions for American Indians. Collins was ordained a minister of the Congregational Church in 1899, one of the few ordained women in American churches at that time.

The items Collins donated to the South Dakota State Historical Society became part of the foundation of the museum’s American Indian collection. Generations can see the artistry of American Indians and gain a better understanding of how they once lived.