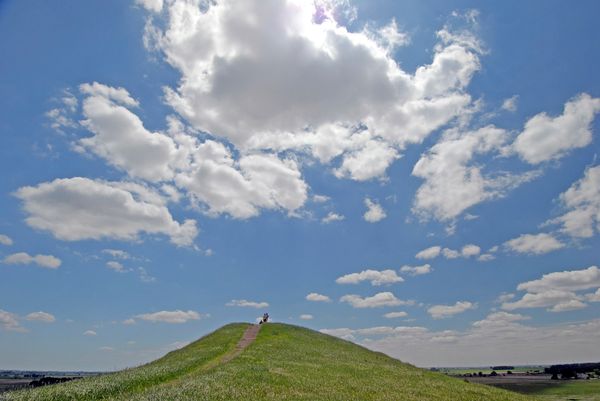 The legend was that any human who approached would be killed.

That legend was apparently enough to make Capts. Meriwether Lewis and William Clark want to find out if it was true.

The captains, accompanied by a contingent of nearly four dozen men, had set off on May 14, 1804, from Camp Dubois near St. Louis, Mo., on their journey to the Pacific coast and back.

As they traveled up the Missouri River, the captains heard about a cone-shaped hill about 8 miles north of what is now Vermillion.

Called Paha Wakan by the Lakota, the American Indian tribes in the area believed the hill to be the home of sprits or devils. The devils were reported to be 18-inches high, human in form, but with large heads and armed with sharp arrows that could kill all persons who attempted to approach the hill. The tribes in the area would not go near the place.

Accompanied by 10 or 11 men and Lewis’ Newfoundland dog, Seaman, Lewis and Clark set out on Aug. 25, 1804, to hike to the top of the hill. They lived to explore another day, as they found no devils. What they did find was what Clark described in his journals as a most beautiful landscape, with numerous herds of buffalo feeding in various directions and the plain extending without interruption as far as eye could see.

Spirit Mound, as the hill is now called, has been restored to native prairie. It is one of the most significant stops on the Lewis and Clark National Historic Trail because it is one of the few places where historians know that the explorers actually stood there.

As the expedition journeyed further up the Missouri River, an Arikara legend captured Clark’s imagination. The legend was that a man and a woman were in love, but the girl’s parents would not let them marry. The pair and their dog wandered off to mourn.

All turned to stone gradually, beginning at their feet. They fed on grapes, and the woman has a bunch of grapes yet in her hand, Clark wrote in his journal on Oct. 13, 1804.

The stones can be found on the northeast corner of West Pollock Resort near Pollock.