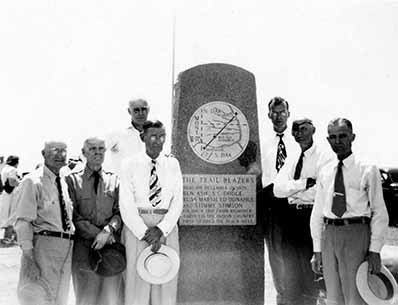 Travelers stopping at a rest area west of Faith off of U.S. Highway 212 will find the monument honoring trail blazer Ben Ash.

Ash was a leading figure in Dakota Territory and South Dakota. He was born on Dec. 19, 1851, in Indiana and had moved as a child to the newly formed town of Yankton in 1859. In 1875, he owned a livery stable and was a deputy U.S. marshal in Bismarck, Dakota Territory. He was described in the Bismarck Weekly Tribune as “one of the truest men that ever held official position.”

Gold was discovered in the Black Hills during an 1874 expedition led by Gen. George Custer. The Bismarck Weekly Tribune reported in December 1875 that 1,000 men were in the Black Hills. Some Bismarck residents realized that advertising their town as the best jumping off point to the Black Hills from the north would benefit the community.

Ash and J.C. Dodge left Bismarck  on Dec. 20, 1875, to forge a trail to the Black Hills. Dodge, also referred to as S.C. Dodge and Henry Dodge, was a county commissioner-elect, businessman and dairy owner.

Several accounts exist of the trail blazers’ journey to the Black Hills. The following account is based on what was printed in the Bismarck Weekly Tribune.
Ash and Dodge were joined by five men from Bismarck the first night on their journey.

According to a letter Ash wrote to his parents, the party followed Custer’s old trail for the greater part of the way and reached the Black Hills on New Year’s Day.

“The Black Hills are full of gold and every man whom we met had something to tell of his own experience which confirms the truth of this assertion. I tried prospecting on a claim of my own which I located on Rapid Creek and took out enough gold to make mother a ring and have sent the dust to Chicago for that purpose,” Ash wrote.

He also described the beauty of the countryside and encouraged his parents to move to the Black Hills, which they did.

Both Ash and Dodge spoke glowingly of the Black Hills and said they intended to move there. Dodge did leave for the Black Hills with livestock intending to ranch there, but was the victim of an Indian attack.

Blazing a trail to Bismarck was just one of the things for which Ash was noted.

Ash resigned as deputy U.S. marshal in 1880. By then, Ash had married Sarah Brisbane, the daughter of a judge in Yankton, and they would have three sons. The Tribune reported that Ash and his family were going to locate in Pierre.

At various times in Pierre, Ash owned a livery business, a butcher shop and retail grocery store. He served as sheriff in Hughes County and Indian Agent at the Lower Brule Agency.

In the 1890s, Ash purchased a horse ranch on the Moreau River. He sold the horses and raised cattle, owning as many as 10,000 head, according to his biography in the South Dakota Hall of Fame. He later raised sheep.

Ash sold his livestock at the beginning of World War I and moved to Sioux Falls, according to biographer Don Patton.

Ash was active in the Democratic party. “A natural leader, Mr. Ash was influential in political affairs in South Dakota, it being said of him that he wielded more power in the state legislature when not a member than did most of the duly elected members,” stated the Bison Courier.

Ash was inducted into the South Dakota Hall of Fame and the National Cowboy Hall of Fame.

Ash became a resident of what is now the Michael J. Fitzmaurice State Veterans Home in 1932. He died in Hot Springs on April 15, 1946.

The Ben Ash Monument was dedicated in July 1949. The granite monument shows a map of the Bismarck – Deadwood Trail. It is engraved with the words “The Trail Blazers” and the names of Ash and those who accompanied him.  Dedication ceremony speaker J. Leonard Jennewein said that Ash told him in the summer of 1945 that when his eyes got better, he would erect a small marker on the Bismarck – Deadwood Trail in memory of Dodge and the other members of his party, placing it at the point from which they first saw the Black Hills.

“It was characteristic of Ben Ash that he thought of this marker as a memorial to his partner, not to himself,” Jennewein said. “It was also typical of the man that he was confident he could do it; after all, he was only 94. But when the grass greened up next spring, his eyes were no better; Ben Ash slipped away from us, and the monument wasn’t erected.”