April 2020-The Most Famous Man Nobody Knows 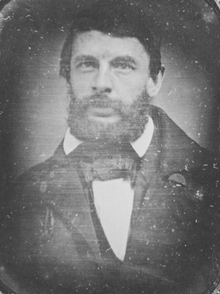 Newspapers in the 1890s reported that John Banvard was living in humble circumstances in Watertown, Dakota Territory.

Humble was a far cry from circumstances to which Banvard once was accustomed. Banvard (1815-1891) had built a mansion, met the Queen of England and had been the richest artist in the Western World.

Banvard built his reputation and fortune as the creator of the largest painting in the world, a panorama of the Mississippi River.

Panorama exhibitions were popular in the 1840s and 1850s. Panoramas were mechanical moving pictures in which a canvas painted with scenes was scrolled in front of an admission-paying audience.

In the spring of 1840, Banvard bought a small skiff – a small, shallow, flat-bottom open boat -- and descended the Mississippi River from St. Louis to New Orleans. He sketched the scenery as he went, relied on his skill as a hunter for food and slept under his overturned skiff.

The journey to New Orleans took more than 400 days, according to accounts of Banvard’s life published in newspapers in 1847.

Banvard went to Louisville, Ky., where he painted on canvas scenes from his sketches.

The finished product, first exhibited in Louisville, was an oil painting on canvas that was 12 feet high and 1,300 feet long. For display, it was placed on upright revolving cylinders, and hand-cranked in 20-foot sections.

Banvard was a showman as well as an artist. He explained each scene to the audience as it rolled by while a pianist played in the background. It was a blend of visual, spoken and musical art. Showing the panorama took nearly two hours.

“The first night he opened in Louisville, he received not a cent. The night was rainy … On the next night of the exhibition, he received the enormous sum of ten dollars. Finally, the public became convinced that his picture was worth looking at, and then they rushed to see it by hundreds. The great painter left the city with a few thousand dollars. He went directly to Boston, where the work of art has been duly appreciated. Admiring thousands have visited it,” stated newspaper articles in 1847.

Banvard later added scenes from the Missouri and Ohio rivers to the panorama.

A written guide to Banvard’s work contained the artist’s autobiography, a history of the panorama and a description of the Mississippi River valley. The title of the pamphlet advertised the panorama as “three-miles long” and “the largest picture ever executed by man.”

From Boston, Banvard took his Mississippi panorama to New York and then to England.

Before leaving for Europe, Banvard married his piano accompanist, Elizabeth Goodnow. They would have seven children, five of whom lived to adulthood.

Banvard was invited to show the panorama in Windsor Castle to Queen Victoria, Prince Albert and other members of the royal family.

“The Queen was highly delighted with both the picture and artist, and Prince Albert, who was alive with curiosity, asked Banvard a great many questions,” stated newspaper articles in the United States in 1849.

After showing the panorama in Paris and visiting Egypt and the Middle East, Banvard and his family returned to the United States in 1852.

He built Glenada, a mansion on Long Island, New York and exhibited his panoramas of the Holy Land and the Nile River to decent business.

Then Banvard’s story went from riches to rags.

Desiring to compete with showman P.T. Barnum, Banvard opened his own museum and theater on Broadway.

It was a financial failure. A combination of this failure, the expense of maintaining a mansion and the Panic of 1873 caused the family serious financial difficulties. Banvard’s son Eugene and his wife, Jessie, had moved to Watertown, Dakota Territory, in 1881, and John Banvard and the rest of the family joined them in Watertown in 1883.

The family quickly became involved in the community, according to an article about Banvard by Joanita Kant that was published in the Spring/Summer 1997 issue of “South Dakota History,” the quarterly journal of the South Dakota State Historical Society.

Banvard painted large tablets of the Lord’s Prayer for the Episcopal Church and helped decorate for socials. He raised money for and supervised the building of Watertown’s armory.

Biographers credit Banvard with writing about 1,700 poems. His poems appeared in local newspapers and he read original poems at public events in Watertown.

Banvard painted little in his final years, according to Kant. He successfully exhibited in Watertown and surrounding communities a large painting based on the burning of Columbia, S.C., in the Civil War. Banvard made publishing history in Dakota Territory when he reissued a poem  in 1885, making it the first book of verse published in southern Dakota Territory, and by producing the first book published in Watertown, “Shorthand Acquired in a Week without a Master,” in 1887.

Banvard died on May 16, 1891, and was buried in Mount Hope Cemetery in Watertown.

As for the Mississippi River panorama, some say that it was used for scenery in the Watertown opera house; others maintain it was shredded and used for insulation in homes; others believe it is stored in former Banvard residences, while others say it was bought by an Englishman who shipped it to India. The list of theories is almost as long as the painting.