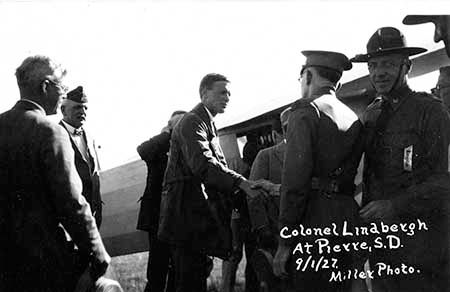 “A president of the United States, the most adored movie star in filmdom, Babe Ruth, Jack Dempsey – all gathered here together could not have attracted half the crowd nor a millionth of the cheering that greeted Colonel Charles A. Lindbergh in South Dakota today,” stated an article in the Sioux Falls Daily Argus-Leader on Saturday, Aug. 27, 1927.

An estimated 30,000 people packed together on an airfield near Renner to see the aviation legend and his airplane, the “Spirit of St. Louis.” Lindbergh had left Fargo, N.D., that morning. En route to Sioux Falls, he circled Aberdeen, Redfield, Huron and Mitchell, allowing people in those communities a glimpse of the famous plane.

A canvas bag containing a message from Lindbergh was dropped from the plane in each community, expressing regret for not having the time to stop and encouraging public support for continued airmail service and the construction of airports.

At Aberdeen, the container carrying the message landed on the Brown County Courthouse lawn. The 11-year-old girl who retrieved the container was given it.
“For a long time to come, the lucky little miss will be the envy of her entire list of friends and playmates, for the reward she has now in her possession will someday prove a great rarity,” stated an article in the Aberdeen Evening News.

The Redfield Press reported that Lindbergh passed over the community at 10 a.m. that Saturday. “The conqueror of the air and the idol of the world was greeted from the hills and house tops by people eager to view the hero and the Spirit of St. Louis.”

Whistles at power plants opened a roar of welcome and the cheers of hundreds of Huronites went up as the young Minnesota flier flew over the city, according to the Evening Huronite.

Lindberg flew over Mitchell at 11:05 a.m. “He came out of the north directly over the center of the city and a message he dropped was picked up by a boy in a crowd of spectators at Third avenue and Main street. The message missed the top of the Republican building by inches.”
The “Spirit of St. Louis” landed at the Renner field precisely at noon as scheduled.

After a five-minute meeting with the reception committee, Lindbergh was driven around the fenced-off landing strip in a convertible, much to the delight of the crowd.
Lindbergh’s speech during the 30-minute program promoted commercial aviation throughout the United States.

Lindbergh’s non-stop flight from New York to Paris over the Atlantic Ocean on May 20-21,1927, had rocketed him to stardom. Lindbergh departed from New York in the “Spirit of St. Louis” on a nationwide tour of the United States on July 20, 1927. The tour was the result of a meeting between Lindbergh and multimillionaire and aviation enthusiast Harry Guggenheim. They decided that Lindbergh would make a three-month tour of the United States, paid for by a fund Harry and his father, Daniel, had established earlier to encourage aviation-related research.

Lindbergh and the “Spirit of St. Louis,” together called “We,” were accompanied on the tour by a plane carrying a representative of the Daniel Guggenheim Fund of the Promotion of Aeronautics and the United States Department of Commerce.

From Renner, Lindbergh flew off in the “Spirit of St. Louis” at 1 p.m. to Sioux City, Iowa, where he spent the night.

Sept. 1 was intended to be a day of rest in Denver, Colo., for Lindbergh.  Instead, Harry Guggenheim sent a telegram to Pierre Mayor John E. Hipple stating that Lindbergh had “expressed a personal desire to spend the day of September first in your city. Can you arrange to take care of his time.” Hipple consulted with others before accepting the request.

Pierre had no airfield where Lindbergh could land, according to “Pierre Since 1910” by Harold Schuler. A landing site was prepared about three miles north of Pierre, on the south slope of Snake Butte.

About 3,500 people were on hand when the “Spirit of St. Louis” touched down at 3:59 p.m. on Sept. 1, one minute ahead of schedule. The Capital City Band played, and cheers went up as Lucky Lindy stepped out of the plane. After a drive around the airfield, the car bearing Lindbergh headed to Pierre for a drive through the city’s main streets. Hipple and his wife, Ruth, hosted a supper for Lindbergh and other guests at their home.

About 5,000 people were waiting in front of the Capitol that evening to hear Lindbergh speak. He explained that he decided to come to Pierre because he wished to give people in that part of the country the opportunity to see the plane that flew across the Atlantic Ocean.

Lindbergh briefly attended a dance in the city auditorium before returning to the Hipple home to thank the Hipples for their hospitality. He then went to the Saint Charles Hotel to retire for the evening.

Several hundred people were on hand the next morning to witness the 9:30 departure of the “Spirit of St. Louis” for Cheyenne, Wyo., where Lindbergh spent the night.

“Once in the air, Colonel Lindbergh banked his plane sharply and returned to give a short display of stunt flying … Suddenly, the silver ‘Spirit of St. Louis’ headed toward Pierre to give a farewell greeting to the people here,” stated an article in the Sept. 2, 1927, Pierre Daily Capital Journal.

En route to Cheyenne, the Lone Eagle, as Lindbergh was nicknamed, was seen by many people who were attending the Haakon County Fair in Philip.

The Deadwood Daily Pioneer-Times stated that the entire populace was on the streets watching as Lindbergh “circled and re-circled the city within the narrow confines of the gulch, at an amazingly low altitude.”

People in Rapid City were watching for  the “Spirit of St. Louis” when “a shadow like that of an eagle soaring before the sun moved slowly across the pavement … and Colonel Lindbergh swooped down out of the cloudless sky.”

Lindbergh did not fly over Lead, but the plane could be seen from the Ellison dumps, according to the Lead Daily Call.

After a swing over the State Game Lodge, the summer residence of President Calvin Coolidge, the “Spirit of St. Louis” passed over Spearfish before flying on to Cheyenne.

Lindbergh dropped messages in the communities his plane flew over, again expressing regret for not having the time to land and encouraging aviation.

Historical markers both at Renner and Pierre commemorate Lindbergh’s visit to South Dakota.

Flying the “Spirit of St. Louis,” Lindbergh touched down in what at that time was all 48 states, visited 92 cities, gave 147 speeches and was seen by millions before the tour ended back in New York on Oct. 23, 1927, according to a website about Lindbergh operated by the Spirit of St. Louis 2 Project.

Airmail usage exploded as a result of the tour, and the public began to view airplanes as a viable means of travel, according to Air Force historian Richard P. Hallion.