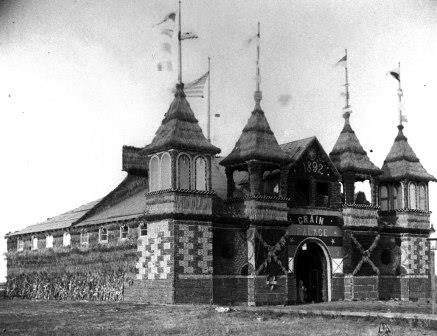 Before the Mitchell Corn Palace, there was the Plankinton Grain Palace.

“The citizens of Aurora county, in view of the bountiful harvest, have decided to erect a grain palace as the prominent feature of a grand celebration to be held at Plankinton,” read an article in the Mitchell Capital on Aug. 21, 1891. “The building will be of Gothic design and the entire structure will be decorated with various kinds of grain. It is intended that this celebration shall be one of the grandest harvest jollifications ever held in the state.”

The idea of a grain palace was not a new one. In the late 19th century, a number of cities on the Great Plains constructed crop palaces to promote their community and encourage people to settle in the area.

A grain palace “is a peculiarly apt and happy expression of an appreciation of nature’s bounty. The community that has material for a lavish grain palace has the inherent qualities of soil and climate which assure prosperity,” stated the Wessington Springs Herald on Oct. 9, 1891.

South Dakota newspapers in 1891 reported harvests of oats from 50 to 100 bushels per acre, 30 bushels of wheat to the acre and corn stalks measuring 11 feet high.

A train load of businessmen from Sioux City, Iowa, attended the inaugural ceremonies for the Plankinton grain palace on Sept. 29, 1891. Sioux City had its first corn palace festival in 1887, with one newspaper stating that interest in the corn palace increased each year.

The Plankinton grain palace was 80 feet square and sat on the north end of Main Street, according to “Palaces on the Prairie” by Rod Evans. Residents of White Lake assisted in the building’s construction.

“The tasty building, adorned with gable, tower and minaret, made an attractive heading for the principle street,” read accounts from newspapers of the day. “Every township in the county was represented by an exhibit of agricultural products … The wheat, flax and other small grain specimens won the admiration of all. Wheat sheaves from fields that yielded over forty-six bushels per acre, and other grain in proportion, attracted conspicuous attention.”

Grain was transformed into works of art depicting an elk, a flock of sheep in a field, and a farm house.

About 200 Mitchell residents took the train to Plankinton to visit the grain palace. A band played as the train pulled into Plankinton, and a parade of visitors and residents passed up Main Street to the palace.

“The palace is indeed a marvel and every visitor was agreeably surprised. The people of Plankinton are to be congratulated on their enterprise in producing such an artistic and attractive exposition of the magnificent crops,” stated the Oct. 9, 1891, Mitchell Capital.
The grain palace was ultimately bought by a farmer, according to an account in one newspaper.

Another palace was built the next fall.

“This magnificent grain palace … is fully two-thirds larger than the one last year. It is 86 by 120 feet on the ground and 100 feet to the top of the tallest tower. The total cost of the building was about $1,400,” stated an article in the Oct. 7, 1892, Mitchell Capital. “The beautiful arched entrance at the side is flanked by two round towers and surmounted by a higher central one, while at each end of the front is another tower. Each of these is topped by a flag pole and all covered with magnificent grain decorations. The building from the corn foundation to the attractive architrave of bundle flax is a study of beauty ... The interior is even more attractive than the outside. Upon entering the door the first thing which greets the sight is the great American eagle, perched upon two American flags crossed.”
In the center of the building was a fountain.

About 1,000 people were reported to attend the opening day on Sept. 28, 1892. The grain palace remained open until Oct. 8. The three main political parties of the day – Republican, Democratic and People’s Party – each had a designated day for orators. Days were also designated for Sioux City residents, farmers, traveling men and education.

That same year though, a Corn Belt Exposition was organized in Mitchell and a corn palace was built in that city. About 500 Plankinton residents took the train to visit Mitchell’s corn palace, and an equal number came to Plankinton by train from Mitchell to visit the grain palace.

The summer of 1893 brought news that Aberdeen was also constructing a grain palace, and the first exposition took place in September.

That competition, along with corn palaces in Sioux City and Mitchell, might have proven too much for Plankinton. The 1892 grain palace was its last.

Ipswich, Gregory, Timber Lake, Rapid City and Saint Francis built crop palaces between 1909 and 1932, according to Evans.
But the only palace that lives on as a grain palace is the one in Mitchell – the World’s Only Corn Palace.