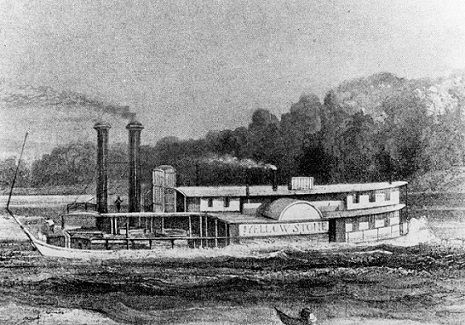 The riverboat R.J.B. brought logs, a family’s belongings and an end to commercial boating on the upper Missouri River when it arrived in Yankton in 1941.

This year’s South Dakota State Historical Society History Conference examines the role rivers have played in the state’s development. The history conference takes place May 3-4 in Rapid City, with the theme “Rivers Run Through It: South Dakota’s Rivers and Streams and the Flow of History.” Information about the conference can be found at www.history.sd.gov or by calling (605) 773-6000.

The last commercial boat to come down the Missouri River was the R.J.B., according to information from the March 1, 1963, The Wi-Iyohi, a former monthly bulletin of the South Dakota State Historical Society.

The R.J.B. was a 90-foot long diesel-powered sternwheeler that was pushing two barges, lashed side by side, each 130 feet long. The sternwheeler’s name was derived from the initials of the names of the captain’s three daughters. A sternwheeler was a steamboat propelled by a paddle wheel at the stern or rear of the vessel.

On board were Geraldine Trost, her parents and three siblings. They were moving via the R.J.B. to Yankton, Trost wrote in a July 16, 2005, letter to the South Dakota State Historical Society.

“However, the R.J.B. hit a snag or a sandbar,” stated Trost, who later lived in Oregon City, Ore. “Mother took us kids off the boat and after a few stops with relatives, we proceeded to Yankton using land transportation. My father, of course, stayed with the R.J.B.”

While navigating the river between Pierre and Fort Pierre, one of the barges hit a pier supporting the North Western railroad bridge.

“Scores of persons lined the parallel highway bridge to watch the R.J.B. negotiate the open span of the railroad trestle,” according to the Pierre Daily Capital Journal on Wednesday, May 14, 1941. “The current caught it and drifted it into the pier.

“Pilot R.E. Spatz of Yankton said the damage was slight and the crew began tearing up the floor of the damaged barge to make necessary repairs as soon as it tied into the Fort Pierre side of the river after the mishap. The damaged barge did not take on any water, Engineer Vincent Butler said.”

The boat had already encountered strong winds and numerous sandbars as it made its way down the river, reported the Daily Capital Journal. A scout boat, equipped with an outboard motor, preceded the craft and made soundings so the sternwheeler could skirt sandbars. Even so, the boat breached itself twice on unseen sandbars.

The barges had been loaded with 71,400 feet of 28-inch cottonwood logs at Welch’s Island, located about seven miles upstream from Pierre. The logs were for a Yankton crate factory.

While repairs were being made, the sternwheeler took on fuel oil and some construction machinery that had been used in building the new Catholic Church in Pierre. It cast loose from the Fort Pierre side of the river on May 15.

“The docking of the towboat here revived fond memories for pioneers who in yesteryears watched numerous river steamers tie in here to unload materials from Sioux City and St. Louis to be carried by wagon train over the Deadwood Trail to Black Hills settlers,” it was reported in the Daily Capital Journal on May 16.

People were watching downriver for the R.J.B., and reported its approaching to the residents of Yankton.

“By the time the boat and barge reached the (Meridian Highway) bridge here there were several hundred people on hand to welcome the boat to its new home,” read an article in the May 31, Yankton Press & Dakotan.

The boat tied up to the river bank near the foot of Walnut Street about 5 p.m. on Friday, May 30, and prepared to discharge its cargo.

The last riverboat had docked.

While the fate of the R.J.B. is unknown, the bridges are still standing. The North Western railroad bridge between Pierre and Fort Pierre and the Meridian Bridge at Yankton are both listed in the National Register of Historic Places. The North Western bridge continues to be used by the DM&E Railroad and the Meridian Bridge is a pedestrian crossing bridge.