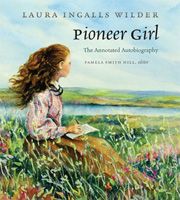 To celebrate the 150th birthday of Laura Ingalls Wilder in 2017, the South Dakota State Historical Society will release a new book on the writer’s legacy.

In 2014, the South Dakota Historical Society Press released Wilder’s “Pioneer Girl: The Annotated Autobiography,” edited by Pamela Smith Hill, which became a national bestseller. The new book, “Pioneer Girl Perspectives: Exploring Laura Ingalls Wilder,” edited by Nancy Tystad Koupal, will bring together writers from across the continent to explore the impact that “Pioneer Girl: The Annotated Autobiography” made on our understanding of one of America’s most iconic authors.

“Readers want to know more about Wilder and her creative process,” said Koupal. “This book will gather important voices on topics like Wilder’s collaboration with her daughter Rose Wilder Lane, the influence of Wilder’s personal politics in her personal voice and her lasting place in children’s literature. The national response to ‘Pioneer Girl: The Annotated Autobiography’ shows how keenly readers want to dig deeper into these topics and others.”

Sales for “Pioneer Girl: The Annotated Autobiography” shot past original expectations, and the book is now in its ninth printing with 165,000 copies in print. A contract for Japanese translation rights is underway between the South Dakota Historical Society Press and Taishukan Publishing.

In addition to “Pioneer Girl Perspectives,” two more volumes dedicated to sharing Wilder’s publishing journey are being planned. The first, slated for publication in 2018, will examine the edited typescripts that came after Wilder’s original, handwritten manuscript and will constitute a rigorous study of Rose Wilder Lane as editor. The second volume will utilize manuscript material leading readers directly from Wilder’s “Pioneer Girl” texts to Wilder’s rough draft of “Little House in the Woods.”

Preorders for “Pioneer Girl Perspectives: Exploring Laura Ingalls Wilder” will open in November 2016; the book will be available in the spring of 2017. Wilder was born Feb. 7, 1867, and died on Feb. 10, 1957. More book details will be released by the Pioneer Girl Project on its website: https://pioneergirlproject.org/.

Koupal is director and editor-in-chief of the Pioneer Girl Project and the South Dakota Historical Society Press. Since 1997, the Press has served its readers and authors with award-winning books and gained a national reputation for excellence. Koupal has over 30 years of editorial experience. She is also a board member of the Laura Ingalls Wilder Memorial Society in De Smet, S.D., and did postgraduate work in American literature at the University of Wisconsin.

“Pioneer Girl: The Annotated Autobiography” is available for $39.95 plus shipping and tax through sdhspress.com and the Heritage Store.