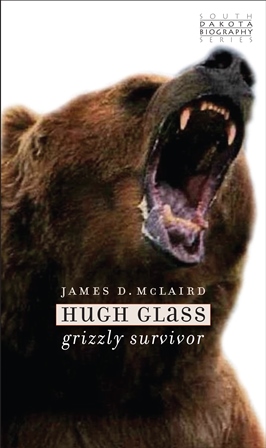 The most famous grizzly-bear attack in the history of the American West took place in 1823 and left Glass struggling for life. Setting out on a journey of revenge and forgiveness, he eventually crawled 200 miles across the plains back to civilization. The story of Hugh Glass has provided fertile ground for articles, books and film, but the real man remains much of a mystery.

“Hugh Glass continues to be a larger-than-life character who occupies a significant place in American folklore,” says Nancy Tystad Koupal, director of the South Dakota Historical Society Press. “However, little has been done to create an accurate historical biography that looks at the other narratives written about him.”

McLaird, a historian, traces the few existing threads of Glass’s life and delves into the role of popular history in making a legend. He also looks at the grizzly bear itself, examining popular sentiments towards the creature that led to its near-extinction.

“Had it not been for a chance encounter with a grizzly bear along the Grand River in what is now northwestern South Dakota,” says McLaird, “Hugh Glass would barely warrant a passing note in fur-trade history. That fact made researching him a challenge.”

James D. McLaird is professor emeritus of history at Dakota Wesleyan University. He is the author of the second South Dakota Biography Series book “Wild Bill Hickok and Calamity Jane: Deadwood Legends” and numerous articles on the Black Hills and American West.
$14.95
2 Inventory