All Guns Fired At One Time 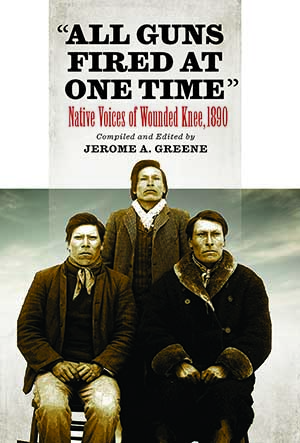 Historians and others have long debated events surrounding the Wounded Knee Massacre of December 1890, which followed decades of conflict between American Indians and the United States Army in the West. Government officials, reporters, and white Americans quickly appropriated the tragedy that took place on Wounded Knee Creek in South Dakota, creating narratives of the events that echoed longstanding federal Indian policy.

“All Guns Fired at One Time” sets aside official narratives of what was once called a “battle” and centers instead on the voices of survivors and witnesses. In addition to extensive first-person accounts, Greene assembles an array of little-known newspaper stories, interviews, correspondence, and testimony, setting them in the context of the days and moments leading to the massacre and the landscape on which it occurred. Together, these sources add a new dimension to the story of what really happened at Wounded Knee.
$34.95
6 Inventory