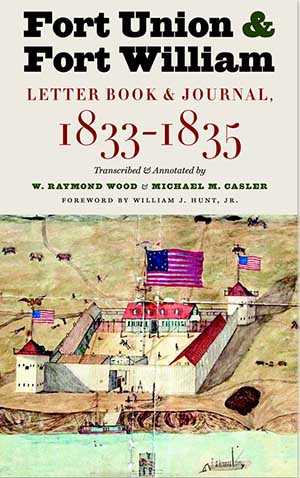 “From 1828 until the late 1860s, the Upper Missouri Outfit of the American Fur Company controlled the fur trade on the upper Missouri River from headquarters at Fort Union on the western edge of present-day North Dakota. In contrast, Fort William, an outpost of the rival Missouri Fur Company located a few miles east at the mouth of the Yellowstone River, struggled and sold out to its competitor less than a year after it opened in 1833.

Published in full for the first time, the 1833–1835 Fort Union Letter Book features dispatches from several prominent fur-trade figures. This rare official record of outgoing correspondence reveals intriguing details about the day-to-day workings of an industry on the cusp of change. Robert Campbell’s journal of his year at Fort William, on the other hand, is a personal account of his attempts to keep Fort Union founder Kenneth McKenzie from taking over the fledgling post he and William Sublette had started.

Fort Union and Fort William offers a window into the fur and bison robe trade of the early 1830s, building upon the previous work of editors W. Raymond Wood and Michael M. Casler in Fort Tecumseh and Fort Pierre Chouteau: Journal and Letter Books, 1830–1850, published by the South Dakota Historical Society Press in 2017. The documents Wood and Casler have compiled and annotated include newly transcribed letters from Robert Campbell and William Sublette, providing two sides of the extraordinary story of the fur trade on the Northern Great Plains.
$29.95
4 Inventory