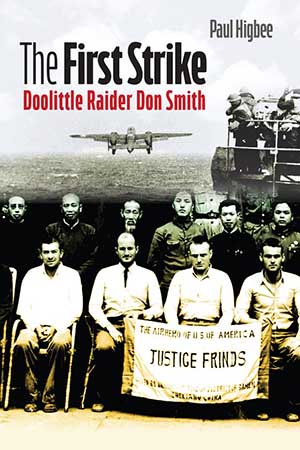 A secret bombing mission, a crash-landing, a bold escape—far from the plains of his homeland, World War II pilot Donald G. (“Don”) Smith swam toward unknown terrain, having just played a significant role in the legendary American military venture known as the Doolittle Raid.

Commanding Plane Fifteen, a B-25 nicknamed TNT, the twenty-four-year-old Smith successfully led his squad to their target in Japan and, after a watery landing, to safety through Japanese-occupied territory in China. Seven months after the Doolittle Raid, Smith died when his new bomber crashed during a routine exercise over the English countryside. He left behind a family and a community that had, only months before, welcomed him home during a brief reprieve from fighting. In his short life, Smith made an indelible impression on those who served with him, but he left behind no personal recollections of his experience. Until now, his story was known only to a close few, surviving through the frequent letters he wrote home to his parents in Belle Fourche, South Dakota.

Author Paul Higbee follows Smith from his childhood through college, flight training, and Army Air Corps service, highlighting the young man’s transformation from South Dakota boy to American hero. Higbee reveals the excitement, danger, and pride of the eighty men who took part in the first American attack on Japan and the uncertainty of life in the United States Army Air Corps during World War II. Smith’s story reflects lives forever altered by wartime experiences, whether on land or in the air.
$24.95
6 Inventory