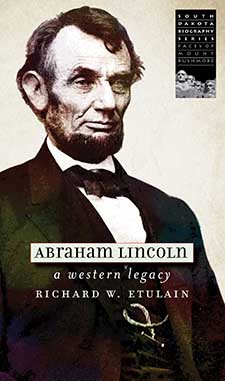 Best remembered as the man who carried the United States through a civil war and emancipated four million slaves, Abraham Lincoln has been the subject of nearly seventeen thousand books. While historians have chronicled his life and presidency, they rarely go beyond his assassination by John Wilkes Booth on 14 April 1865 to look at his legacy in the American West.

Abraham Lincoln: A Western Legacy reveals how the sixteenth president shaped the country beyond the Mississippi River. Having grown up on the frontier and taken part in its political development, Lincoln often turned his attention westward after becoming president. By overseeing policies such as the Homestead Act and the Pacific Railroad Act and making key political appointments, Lincoln opened American Indian lands to settlers who forever changed the landscape and laid the foundation for the region’s modern politics and identity.

Author Richard W. Etulain focuses on Lincoln’s role in remaking the West while providing a concise overview of his life. He also advances Lincoln scholarship by looking at efforts to memorialize the president in the decades following his assassination. Etulain’s original research, including his use of correspondence between local figures such as Senator Peter Norbeck and historian Doane Robinson, provides unique insight into the discussions that led to Lincoln’s immortalization on a mountain in the Black Hills of South Dakota.
$14.95
6 Inventory