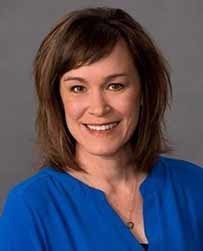 Sr. Manager, Corporate Community Affairs
Black Hills Energy
A fifth-generation South Dakotan, Val is a life-long resident of the Black Hills. One side of her family operated a sawmill in the Custer State Park area before it was a state park. Today her extended family continues to enjoy what was originally the workman’s cabin built near the sawmill in 1915. After many trips to the Pioneer Museum in Rapid City as a child, her earliest career aspiration was to be an American Indian chief so she could wear the colorful beaded moccasins and feathered headdresses she admired.

Carrying on her past mothers’ long love of genealogy, which has traced the family back to 800 A.D. with King Charlemagne of France, Val a recently assumed the family “torch” in the Mayflower Society. Val is a former president of the Board Museum Alliance of Rapid City (Journey Museum). Learning of the loss of her grandfather in WWII, a B-24 pilot who learned how to fly at the Clyde Ice field in Spearfish, Val began her study and admiration of the “Greatest Generation”. Her favorite South Dakota historical experience was a 3-generation “girl trip” to Laura Ingalls’ DeSmet. Her favorite historic building is old Rapid City High School, which her grandfather attended in the 1930s and she attended as Dakota Jr. High in the 1980s. She is grateful the structure still stands despite a close call with a fire baton during a school talent show.