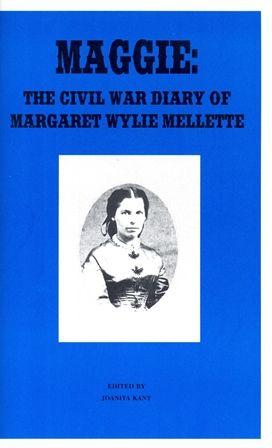 Margaret Wylie Mellette (6 August 1843- 29 November 1938) was the wife of Arthur Calvin Mellette, the last Governor of Dakota Territory and the first Governor of the State of South Dakota.

Maggie was first courted by Arthur Mellette’s older brother, James T. Mellette. Maggie and Arthur courted while Arthur was a student at Indiana University in Bloomington, where he graduated in 1863, and after which, he immediately attended law school for a year.

Arthur told Maggie that the knowledge of his love for her came to him suddenly as a sophomore in college.

The romance had progressed for over three years by the time that Arthur enlisted in Company “H” if the Ninth Indiana Volunteers. He had begun to serve as a private in the Union Army in October 1864, in the place of his older brother, James, whose mother thought that his health would not allow the strain of a term in the Army. During the time that he was in the Army during the Civil War, both Arthur and Maggie kept diaries. They were both twenty-two years of age. As Maggie’s diary began, she was living at home. Arthur was finally mustered out on 28 September 1865.

Arthur and Maggie were married on 29 May 1866. The entries in Maggie’s diary ended shortly thereafter.
$6.50
1 Inventory