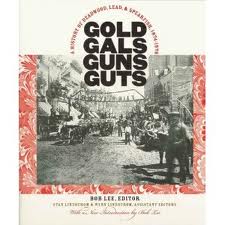 Beginning with the gold rush of 1876, the northern Black Hills became home to an assortment of prospectors, entrepreneurs, gamblers, and criminals. Gold brought them to the area. Gals, many of them prostitutes, followed the miners. Guns often ruled in the rough-and-tumble communities where it took guts to succeed.

Through the photographs, newspaper accounts, and a lively text, "Gold, Gals, Guns, Guts" recounts the history of the Black Hills communities of Deadwood, Lead, and Spearfish from the Custer Expedition in 1874 to the United States Bicentennial in 1976. Bob Lee’s new introduction details the changes in the area since the book was first published, including the return of gambling to Deadwood.
$24.95
1 Inventory