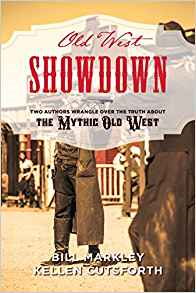 Drawing on fact and folklore, dueling authors Bill Markley and Kellen Cutsforth present opposing viewpoints pertaining to controversies surrounding some of the most well-known characters and events in the history of the Old West.

In an entertaining and conversational style, Markley and Cutsforth take conflicting sides to debunk and in some cases, proliferate the myths, legends, and realities of some of the West’s most famous figures, including:
- Billy the Kid
-Jesse James
-Buffalo Bill Cody
-Calamity Jane
-the Earp brothers
- and many more<

The real lives of the historic figures in Old West Showdown are shrouded in controversy and myth. Was Jesse James a Southern Son fighting for the cause of the fallen Confederacy, or a blood-thirsty cutthroat justly pursued by the authorities? Was Billy the Kid a misunderstood youth or a cold-blooded killer? Did Buffalo Bill Cody truly ride for the Pony Express as a young man? Or, was he just a blowhard who trumped up his own past in an attempt to seem more heroic in the eyes of audiences attending his Wild West shows? These questions and many more will be explored in this exciting book.
$22.95
4 Inventory