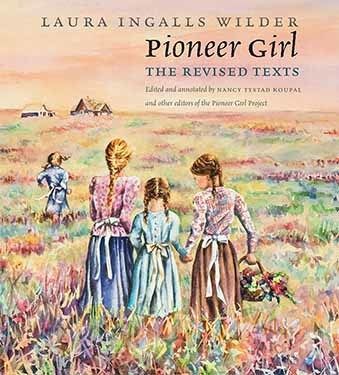 The annual AUPresses Book, Jacket and Journal Show, is in its 57th year of honoring academic publishers around the world. This year a virtual display of all winners can be found at design.up.hcommons.org.

“I was especially pleased to discover designers who find ways to break free from traditional typography—not just to call attention to themselves, but to enlighten the content, or simply to delight the reader,” said Stephen Coles, a juror for the 2022 awards.

For generations, the works of Laura Ingalls Wilder have defined the American frontier and the pioneer experience for the public at large. “Pioneer Girl: The Revised Texts” presents three typescripts of Wilder’s original “Pioneer Girl” manuscript in an examination of the process through which she and her daughter, Rose Wilder Lane, transformed her autobiography into the much-loved Little House series. As the women polished the narrative from draft to draft, a picture emerges of the working relationship between the women, of the lives they lived, and of the literary works they created.

Koupal and other editors of the Pioneer Girl Project provide a meticulous study of the Wilder/Lane partnership as Wilder’s autobiography undergoes revision, and the women redevelop and expand portions of it into Wilder’s successful children’s and young adult novels and into Lane’s bestselling adult novels in the 1930s. The three revised texts of “Pioneer Girl,” set side by side, showcase the intertwined processes of writing and editing and the contributions of writer and editor. In background essays and annotations, Koupal and her team of editors provide historical context and explore the ways in which Wilder or Lane changed and reused the material.

Wilder and Lane’s partnership has been the subject of longstanding speculation, but “Revised Texts” is the first work to explore the women’s relationship by examining the evolution of surviving manuscripts. Showcasing differences in the texts and offering numerous additional documents and handwritten revisions, the editors create a rich resource for scholars to use in assessing the editorial and writing principles, choices, and reasoning that Lane employed to shape the manuscripts for publication. Readers can follow along as Wilder grows into a novelist that “no depression could stop.”

Koupal is director and editor-in-chief of the Pioneer Girl Project. She received an M.A. in English from Morehead State University in Kentucky and did postgraduate work in American literature at the University of Wisconsin, Madison. She founded the South Dakota Historical Society Press in 1997. Koupal is also the editor of “Pioneer Girl Perspectives: Exploring Laura Ingalls Wilder.”

The South Dakota Historical Society Press is committed to producing books reflecting the rich and varied history of the Northern Great Plains. “Pioneer Girl: The Revised Texts” is available for $49.95 plus shipping and tax and can be purchased through most bookstores or ordered directly from the South Dakota Historical Society Press. Visit www.sdhspress.com or call 605-773-6009. For distribution information, contact orders@sdshspress.com. Find out more about the Pioneer Girl Project at pioneergirlproject.org. For information about membership in the State Historical Society, visit history.sd.gov/membership.