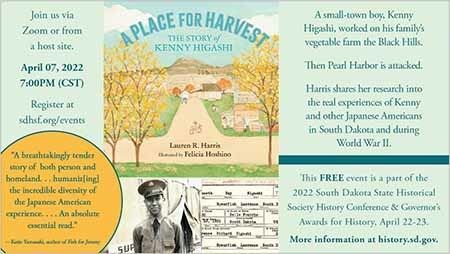 The presentation, “Loyalty and Freedom: The All-Japanese American Soldiers of WWII,” looks at the unwavering courage of the 100th/442nd Regimental Combat Team and the men in the unit who helped procure freedom, not only for those in the European countries where they fought, but also for their families, many of whom lived behind barbed wire in incarceration camps in the United States.

Harris became interested in the stories of these men while interviewing Kenneth (Kenny) Higashi for the Rapid City Journal, and Kenny became the subject of her upcoming children’s picture book “A Place for Harvest: The Story of Kenny Higashi,” illustrated by award-winning artist Felicia Hoshino. Higashi was a South Dakota small-town boy with a big heart who never imagined that his life would take him from his family’s vegetable farm in the Black Hills to war in Europe.

The all-Japanese American 100th/442nd Regimental Combat Team was one of the most successful U.S. Army units of World War II. Nicknamed the “Purple Heart Battalion,” and with the motto “Go For Broke,” the 100th/442nd served in some of the most difficult battles of WWII and earned the respect of officers and fellow soldiers alike. Harris personally interviewed Kenny many times, along with other veterans, and she has extensively researched the 100th/442nd, working with the Go For Broke National Education Center. Her writings highlight the veterans’ inspiring stories of bravery to preserve the American spirit of unity and liberty.

The April History Talk is in conjunction with the 2022 South Dakota State Historical Society History Conference and Governors Awards for History, April 22-23, at the Pierre Ramkota Hotel and Convention Center. More information and conference registration can be found at www.sdhsf.org/2022-history-conference-registration-page.html. Educators may attend this presentation and the conference for continuing education credit hours. Individuals can attend Harris’s virtual presentation via Zoom. Free registration for History Talks is available at sdhsf.org/events.

History Talks is a monthly speaker series sponsored by the South Dakota Historical Society Foundation. To support future events and the activities of the State Historical Society, visit sdhsf.org to donate today. For information about society membership, call 605-773-6000. “A Place for Harvest: The Story of Kenny Higashi” may be purchased through the Heritage Stores, with locations at the Cultural Heritage Center and the State Capitol, and online at sdhsf.org.