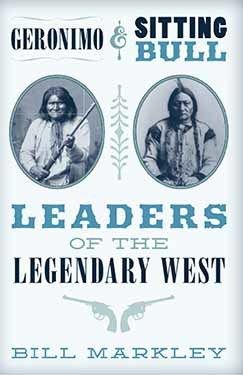 The stories of two of America’s most famous Native American leaders will be told during a program at the Cultural Heritage Center on Thursday, Oct. 14.

“Most Americans have heard of Geronimo and Sitting Bull, but know little about them. Markley gives people a glimpse at what the Lakotas and Apaches went through as America expanded into their territories,” said Catherine Forsch, chief executive officer of the South Dakota Historical Society Foundation. The foundation is the nonprofit fundraising partner of the South Dakota State Historical Society and is sponsoring the program.

Markley will speak in person at the Cultural Heritage Center. People may listen to him there or virtually via Zoom. Please register for the free program at sdhsf.org.

“Geronimo and Sitting Bull” is the third in Markley’s Legendary West series. The first book covered lawmen Wyatt Earp and Bat Masterson while the second book was about outlaws Billy the Kid and Jesse James.

“I thought it was important to cover the Native American experience and viewpoint of the expanding American frontier. Most people have heard the names Geronimo and Sitting Bull, so I focused on them to tell the story,” Markley said. “I found both Geronimo and Sitting Bull wanted to preserve and continue their ways of life. They just wanted to be left alone to continue in the traditions of their people. After they surrendered, the federal government had complete control over their lives – what they could do and not do. What happened to them shows what can happen when government has complete control and there is no one to whom an individual can appeal.”

Markley said the challenges in researching and writing the book were cultural. He used Apache and Lakota accounts as much as possible in telling about the two men.

“I am not a Lakota or an Apache,” Markley said. “I admit that by not being part of those cultures I have probably missed subtle aspects of each. Another challenge for me was geographical locations in Mexico. Much of Geronimo’s activities took place in Mexico and I have not visited those locations.”

“Geronimo and Sitting Bull” is sold in the Heritage Stores at the Cultural Heritage Center and Capitol.

Those who would like more information about the program or need assistance in registering for it may call 605-773-6006.