Deadwood’s past featured in Sept. 9 program at Cultural Heritage Center 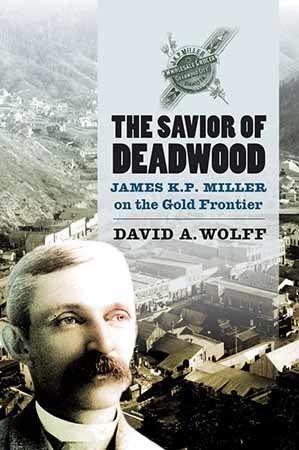 Deadwood’s past includes a man who saved it from extinction. His role will be remembered in an author presentation at 7 p.m. CDT (6 p.m. MDT) on Thursday, Sept. 9.

David A. Wolff will discuss “The Boom and Bust of Deadwood and One Man’s Fight to Save the Town.” The talk is based upon his book “The Savior of Deadwood: James K.P. Miller on the Gold Frontier.” People will be able to hear Wolff speak in person at the Cultural Heritage Center in Pierre and virtually via Zoom. Please register at www.sdhsf.org to attend at the CHC or virtually.

During the exciting, tumultuous, and violent gold rush years, Deadwood boomed, as did some prospectors and entrepreneurs. James K.P. Miller was among the most successful entrepreneurs. The rush quickly waned, and the good times soon ended. As Deadwood’s fortunes continued to slide downhill in the 1880s, Miller decided he needed to save his business and the town. Operating first through the Board of Trade and then on his own, he worked to open new mines, bring in railroads and reinvigorate the town’s economy. Through his efforts Deadwood became a prosperous railroad, ore processing, and mercantile center in the 1890s.

“Miller arrived in Deadwood in 1876 just days after the death of Wild Bill Hickok. By the time of Miller’s death in 1890, he had gained a reputation as the ‘savior of Deadwood’ for his efforts to bring prosperity to the area,” said Catherine Forsch, chief executive officer of the South Dakota Historical Society Foundation. The foundation and South Dakota Historical Society Press are sponsoring the free program. Everyone is welcome to attend.

Wolff is professor emeritus of history at Black Hills State University in Spearfish.

“I have had a lifelong interest in Deadwood as well as in Western mining history,” Wolff said. “Those two interests came together at the slag pile in lower Deadwood. I had long noticed this large pile of black rock, and I eventually became curious about its origin. After a little research, I discovered that it came from the Deadwood & Delaware Smelter, and that James K.P. Miller had been the force behind the smelter. From that first encounter with Miller, I soon uncovered his importance to the town, ultimately leading to the book, ‘The Savior of Deadwood: James K.P. Miller on the Gold Frontier.’”

“The Savior of Deadwood: James K.P. Miller on the Gold Frontier” was recently published by the South Dakota Historical Society Press.

The book is sold at the Heritage Stores at the Cultural Heritage Center and the Capitol. Please call 605-773-6006 for more information about the program. For information on membership in the South Dakota State Historical Society, call 605-773-6000 or email jeff.mammenga@state.sd.us.