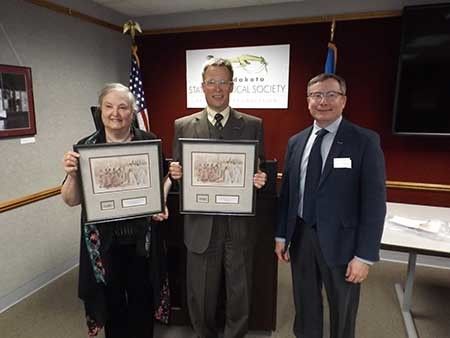 Two longtime South Dakota State Historical Society staffers who retired in 2020 will be announced as winners of the prestigious Robinson Memorial Award on Saturday during the society’s annual history conference.

Nancy Tystad Koupal and Jay D. Vogt will be recognized for their lifetime contributions to preserving the history of South Dakota through the award, which is named for former state historians Doane and Will G. Robinson and is one of the Governor’s Awards for History.

Koupal retired in July, having served as director of the society’s Research and Publishing Program since 1979, including being editor of the award-winning “South Dakota History.” In 1997, Tystad Koupal was the genius and drive behind the creation and success of the South Dakota Historical Society Press.

Others being recognized Saturday with Governor’s Awards for History include Larry Belitz of Hot Springs, John Mollison of Sioux Falls and Wayne Fanebust of Sioux Falls in the individual category; Scott Tubbs of Rapid City as History Teacher of the Year; and Philip Burnham of Albuquerque, New Mexico, with the Herbert S. Schell Award.

Belitz is an historical artist, author, consultant, speaker, teacher, advisor and curator, whose focus is on the American Indian lifestyle and history.

Mollison is recognized for using his artistic abilities to document the stories of combat aviators from World War II, the Korean War and the Vietnam War through film documentaries and interviews of the hero aviators from South Dakota.

Fanebust is recognized for his dedication to preserving the history and stories of our great state. He has written and had several books published about the characters and events that have taken our state from a territory to statehood.

Tubbs has taught for 38.5 years, including the last 34 at Stevens High School. He has been called a living legend in Rapid City. His AP US History Class is known as a tough but rewarding course. The capstone highlight of the course is a 2-day road trip to the site of the Battle of Little Big Horn in Montana and other historical sites along the way.

The Schell Award is given annually to the author of the best article published in the previous year’s “South Dakota History,” the society’s award-winning quarterly journal. The award is named for Herbert S. Schell, an historian and long-time University of South Dakota professor. Burnham’s winning article, “’We consider ourselves human beings’: The Education of Clarence Three Stars” appeared in the Summer 2020 issue of the journal. The article examines the life of a Lakota advocate who lived through a time of significant change.

This year’s history conference is a virtual event. Online registrations are still being accepted at https://www.sdhsf.org/historyconferenceregistration.html. For more information about the State Historical Society or how to become a society member, please visit history.sd.gov or call (605)773-6000.