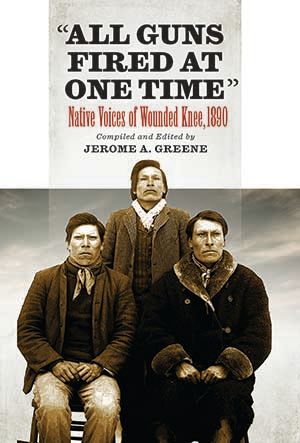 The South Dakota State Historical Society’s latest book, “‘All Guns Fired at One Time’: Native Voices of Wounded Knee, 1890,” compiled and edited by Jerome A. Greene, sets aside official narratives of what was once called a “battle” and centers instead on the voices of survivors and witnesses.

Historians and others have long debated events surrounding the Wounded Knee Massacre of December 1890, which followed decades of conflict between American Indians and the United States Army in the West. Government officials, reporters, and white Americans quickly appropriated the tragedy that took place on Wounded Knee Creek in South Dakota, creating narratives that echoed longstanding federal Indian policy.

In addition to extensive first-person accounts, Greene assembles an array of little-known newspaper stories, interviews, correspondence, and testimony, setting them in the context of the days and moments leading to the massacre and the landscape on which it occurred. Together, these sources add a new dimension to the story of what really happened at Wounded Knee.

“These accounts, largely dismissed shortly after the event and overshadowed by the versions presented from the military perspective, are primary sources of great historical value and consequence,” said historian R. Eli Paul, who has written extensively on Wounded Knee and the army in the West. “They are essential for understanding this (still) controversial event."

Greene is the author of 23 books in addition to many scholarly articles and government reports. A United States Army veteran, he earned degrees in history from Black Hills State University and the University of South Dakota. Following studies at the University of Oklahoma, Greene taught American Indian history at Haskell Indian Nations University. He then began a career as a research historian with the National Park Service, retiring in 2007 after more than 40 years of government service.