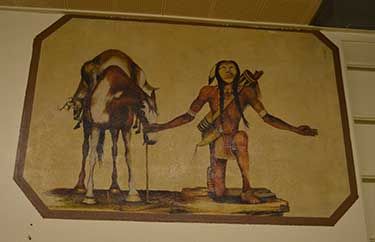 The He Dog School near Parmelee was recently placed in the National Register of Historic Places, according to the South Dakota State Historical Society.

The National Register is the official federal list of properties identified as important in American history, architecture, archaeology, engineering and culture. The State Historic Preservation Office of the State Historical Society and the Rosebud Sioux Tribal Historic Preservation Office worked in conjunction with the National Park Service, which oversees the National Register program, to list the school.

"South Dakota's history is rich in American Indian culture, pioneer life and change," said Jay D. Vogt, state historic preservation officer and director of the State Historical Society at the Cultural Heritage Center in Pierre. "Properties listed in the National Register are important for their role in South Dakota's culture, heritage and history. And when properties get listed, it shows that their owners take pride in their role in preserving that culture, heritage and history."

Buildings, sites, structures and objects at least 50 years old possessing historical significance may qualify for the National Register, according to Vogt. Properties must also maintain their historic location, design, materials and association. Listing in the National Register does not place any limitations on private property owners by the federal government.

He Dog School was listed in the National Register for its educational significance, architecture and outstanding murals by James “Jim” Blackhorse.

He Dog was a principal chief of the Sicangu Lakota.  He established a camp in the 1880s a few miles west of the school which bears his name.

The school was built in 1934 and became the center of community life when opened a year later.  The school was thoroughly modern with electricity and plumbing.

It opened during a transitional time.  The Indian Reorganization Act of 1934 sought to decrease the federal government’s responsibility in American Indian affairs.  Part of that change was closing federally-run boarding schools in favor of consolidated day schools on the reservation like He Dog.

These schools served children and adults but were not without criticism.  Assimilation was still their goal and the federal government pushed more manual arts training for boys and home economics curriculums for girls than it did on their rural white counterparts.

The school was constructed with New Deal funding, likely through the Public Works Administration.  It was built off a Rosenwald Fund school plan and is the only example of that type in the state.

Julius Rosenwald was a majority owner of Sears, Roebuck and Company and one the largest twentieth century philanthropists.  Working with Booker T. Washington at Alabama’s Tuskegee Institute, Rosenwald funded the construction of nearly 5,000 African-American schools, mainly in the South.

Rosenwald’s school-building program also provided free plans.  In 1934, the Indian Bureau (Bureau of Indian Affairs) selected a standardized design out of his “Community School Plans” for He Dog.

The school contains ten large murals by James “Jim” Blackhorse.  These murals were likely funded in 1939 through the Federal Art Project, a program of the Works Progress Administration.