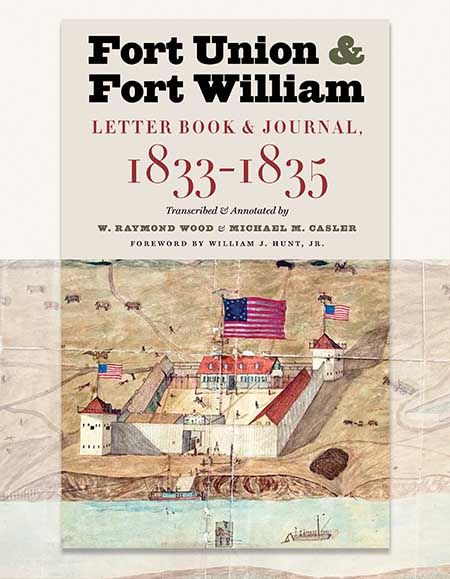 The latest book from the South Dakota State Historical Society looks at the history of two fur trade posts on the upper Missouri River.

From 1828 until the late 1860s, the Upper Missouri Outfit of the American Fur Company controlled the fur trade on the upper reaches of the Missouri River from its headquarters at Fort Union, located on the western edge of present-day North Dakota. In contrast, Fort William, an outpost of the rival Missouri Fur Company situated a few miles east at the mouth of the Yellowstone River, struggled and sold out to its competitor less than a year after it opened in 1833.

The 1833–1835 Fort Union Letter Book features dispatches from several prominent fur-trade figures. This rare official record of outgoing correspondence reveals intriguing details about the day-to-day workings of an industry on the cusp of change. Robert Campbell’s journal of his year at Fort William, on the other hand, is a personal account of his attempts to keep Fort Union founder Kenneth McKenzie from taking over the fledgling post he and William Sublette had started.

The documents Wood and Casler have compiled and annotated include newly transcribed letters from Campbell and Sublette. The publication of these documents builds upon the editors’ previous volume, “Fort Tecumseh and Fort Pierre Chouteau: Journal and Letter Books, 1830–1850,” published by the South Dakota Historical Society Press in 2017.

Wood has a Ph.D. in anthropology from the University of Oregon and taught anthropology at the University of Missouri for nearly four decades. Among his many publications are “Prologue to Lewis and Clark” and “Twilight of the Upper Missouri River Fur Trade.” Casler, a former park ranger with the National Park Service, currently works as an independent historical researcher and is the author of numerous articles and books on the Upper Missouri fur trade.

“Fort Union and Fort William” is available for $29.95, plus shipping and tax, and can be ordered directly from the South Dakota Historical Society Press at sdhspress.com or by emailing orders@sdhspress.com. Until further notice, orders are filled every Wednesday in accordance with social distancing measures in response to the COVID-19 pandemic. Follow the South Dakota Historical Society Press on Facebook (SDHS Press) and Twitter (@sdhspress) for more.