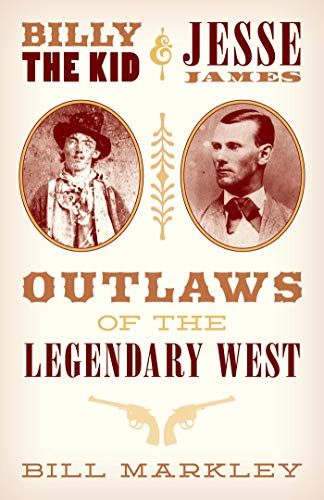 Pierre author Bill Markley will compare the lives of two of the most notorious outlaws in the American West in a Feb. 11 program at the Cultural Heritage Center in Pierre.

Markley is the author of “Billy the Kid and Jesse James: Outlaws of the Legendary West.” He will answer the question of which was the “biggest, baddest” outlaw at 7 p.m. on Tuesday, Feb. 11. Everyone is welcome to attend the free program, which is part of the History and Heritage Book Club.

“Billy the Kid and Jesse James are two outlaws who never ride off into the sunset of our imaginations. Markley will compare the lives of the two men and tell which outlaw he believes left the biggest legacy,” said Catherine Forsch, chief executive officer of the South Dakota Historical Society Foundation. The foundation is the nonprofit fundraising partner of the South Dakota State Historical Society and the sponsor of the History and Heritage Book Club.

Billy the Kid, 1859/60 – 1881, was a notorious gunfighter who was reputed to have killed at least 27 men before being gunned down at about age 21. Jesse James, 1847 – 1882, and his gang were responsible for more than 20 bank and train robberies and the murders of individuals who stood in their way.

Markley retired from state government after working 40 years with the South Dakota Department of Environment and Natural Resources. He re-enacts Civil War infantry and frontier cavalry and has participated in the films “Dances with Wolves,” “Crazy Horse,” and others. He is a member of the Western Writers of America and is a staff writer for WWA’s “Roundup” magazine. He also writes for other magazines and has written six nonfiction books and one fiction book.

“Billy the Kid and Jesse James” is sold at the Heritage Stores at the Cultural Heritage Center and the Capitol, and online at www.sdhsf.org.

People may participate in the program via the internet or by phone. Please call 605-773-6006 at least two days in advance of the program for more information.