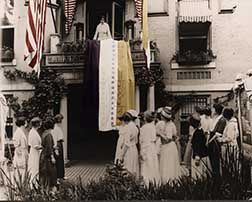 The nationwide celebration of women’s suffrage continues at the Cultural Heritage Center in Pierre with the opening of a new exhibit on Saturday, Nov. 16.

The exhibit, located in the Observation Gallery on the second floor of the museum, is entitled “The Right is Ours: Women Win the Vote.” The exhibit provides an overview of the movement, led by three generations of women across both South Dakota and the United States to give women the right to vote in state and national elections. It focuses primarily on the period from 1848 through 1920, but it also addresses the legacy and lessons of the women’s suffrage movement to the present day.

The exhibit, on display through Nov. 3, 2020, follows the multifaceted women’s suffrage movement from the Seneca Falls Convention in 1848 through the ratification of the 20th Amendment of the U.S. Constitution on Aug. 18, 1920. It also focuses on people and events in South Dakota that led to the state legislature granting women in South Dakota the right to vote in December 1918. The exhibit features historical photographs of people and events important to the movements, as well as reproductions of banners, hats, and other materials used by suffragists.

“The topic of women’s suffrage is important to an understanding of both state and national history,” said Museum Director Jay Smith. “The State Historical Society is proud to assist the public in understanding how difficult it was to accomplish this goal and what a profound impact it had on American society – an impact that continues to be felt today.”

Smith said museum staff plan to bring in a speaker in April 2020 from the Smithsonian’s National Museum of American History to give a presentation on women’s suffrage and promote the exhibit.

The State Historical Society is honoring and interpreting the importance of the suffrage movement with several projects, including the publication of three books over three years, as well as a small display about suffrage hosted by the State Archives.

The press publications include “Born Criminal: Matilda Joslyn Gage, Radical Suffragist” by Angelica Shirley Carpenter and “Equality at the Ballot Box: Votes for Women on the Northern Great Plains,” edited by Lori Ann Lahlum and Molly P. Rozum. Both books are available for purchase in the Heritage Stores at the Cultural Heritage Center and state Capitol. The third book, “The Voice of Liberty” by Angelica Shirley Carpenter and illustrated by Edwin Fotheringham, is due to be released in fall 2020.

The State Historical Society is planning several other events in 2020 to continue bringing attention to women’s suffrage. More information on those events will be coming.