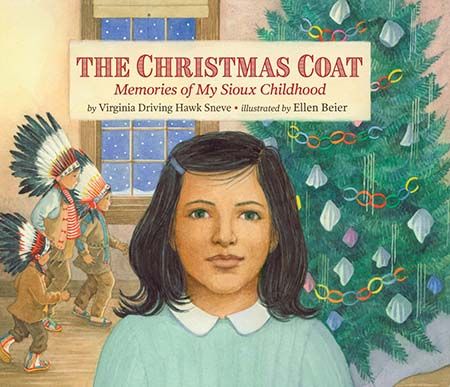 On Thursday, Oct. 17, at 7 p.m. CDT, author Virginia Driving Hawk Sneve will share a story of family, generosity, and joy from her childhood as told in “The Christmas Coat: Memories of My Sioux Childhood” as part of the History and Heritage Book Club at the Cultural Heritage Center in Pierre.

Everyone is welcome to attend the free program, and attendees are encouraged to bring clean and gently used casual winter coats and parkas for men and women, and children’s winter wear such as coats, snow pants, mittens, hats, and scarves to be donated to a local “Share the Warmth” coat drive.

“The story that unfolds in ‘The Christmas Coat’ is that a young Virginia longs for a new winter coat, but knows that she may not have a chance for a coat this year. As the daughter of an Episcopal priest, her family chooses last from among the clothing sent by churches in ‘The East.’ In the end, Virginia is rewarded for doing what is right,” said Catherine Forsch, president of the South Dakota Historical Society Foundation.

Sneve lives in Rapid City. She grew up on the Rosebud Indian Reservation and is a member of the Rosebud Sioux tribe. She began her professional writing career in 1972 with the publication of “Jimmy Yellow Hawk.” Since then, she has published many books for both children and adults.

Among the awards she has received are the Native American Prose Award and the Spirit of Crazy Horse Award. She was the first South Dakotan to receive the National Humanities Medal, awarded for work that deepens the nation’s understanding of the humanities and broadens citizens’ engagement with the humanities.

“The Christmas Coat” was first published in 2011. It was reprinted in paperback this fall by the South Dakota Historical Society Press.

The children’s book was named in the Smithsonian Magazine’s Best Children’s Books of 2011 and received the American Indian Youth Literature Award in 2012.

Charlene Lund of Pierre will be present at the meeting to tell about the Pierre/Fort Pierre “Share the Warmth” coat drive she is coordinating. The coat drive will take place Oct. 24-28, with the coat giveaway Nov. 7 and 8 in the Trinity Community Center of First United Methodist Church in Pierre.

“The Christmas Coat” is sold at the Heritage Stores at the Cultural Heritage Center and the Capitol.

People can join in the program from locations other than the Cultural Heritage Center. People need a laptop or desktop computer with a camera, mic and speakers, and an internet connection using Google Chrome as their Internet Explorer browser. Arrangements to join the program need to be made at least two days in advance by calling 605-773-6006.