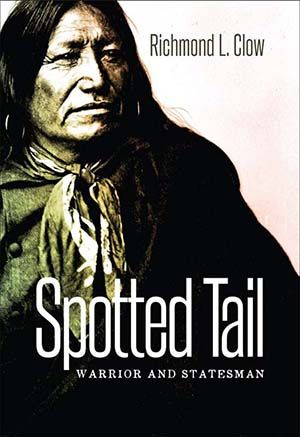 An influential leader on the Northern Great Plains will be the focus of an Oct. 8 program at the Cultural Heritage Center.

Richmond L. Clow will tell about Sicangu Lakota leader Spotted Tail at 7 p.m. CDT on Tuesday, Oct. 8, as part of the History and Heritage Book Club. Clow is the author of “Spotted Tail: Warrior and Statesman,” published by the South Dakota Historical Society Press.

“Spotted Tail’s military and diplomatic accomplishments made him one of the most significant Lakota leaders of his time. Others may have received more fame, but it was Spotted Tail who was the spokesman who achieved so much for so many Lakota before his untimely death,” said Catherine Forsch, president of the South Dakota Historical Society Foundation.

The foundation is the nonprofit fundraising partner of the South Dakota State Historical Society. The foundation and Press sponsor the History and Heritage Book Club.

Everyone is welcome to attend the free program.

Spotted Tail (1823-1881) assumed leadership of the Sicangu Lakota during a time of conflict and change.

In 1866, Spotted Tail separated from other tribal leaders and supported giving the Bozeman Trail leading to the gold fields of Montana to the Americans. In the short term, he believed that conflict with the United States created more problems than peace; in the long term, war with the United States would destroy the Sicangus, according to Clow.

Spotted Tail negotiated sections of the Fort Laramie Treaty of 1868 and favored amending the treaty a decade later. In exchange for concessions, he sought tribal employment, continuing possession of horses and guns, and ongoing Congressional provisions for his community. Spotted Tail’s participation in the Black Hills Agreement of 1877 saved both tribal and nontribal lives, but at the cost of opening former tribal lands to outsiders.

On Aug. 5, 1881, Spotted Tail was shot and killed on the present-day Rosebud Indian Reservation by Crow Dog. Crow Dog’s conviction for murder was set aside by a landmark U.S. Supreme Court ruling, which stated that the U.S. government had no jurisdiction over crimes committed on Indian lands.

Clow is professor emeritus of Native American Studies at the University of Montana in Missoula. He has written books and numerous articles about American Indian and Black Hills topics. He received the Robinson Award from the South Dakota State Historical Society for lifetime achievement in history.

Clow will be speaking to the History and Heritage Book Club via video conferencing. Clow and those at the Cultural Heritage Center will be able to see, hear, and talk to each other.

Others who want to join the program remotely can make arrangements in advance of the program by calling 605-773-6006.

“Spotted Tail: Warrior and Statesman” is sold at the Heritage Stores at the Cultural Heritage Center and the Capitol, or by calling 605-773-6346.