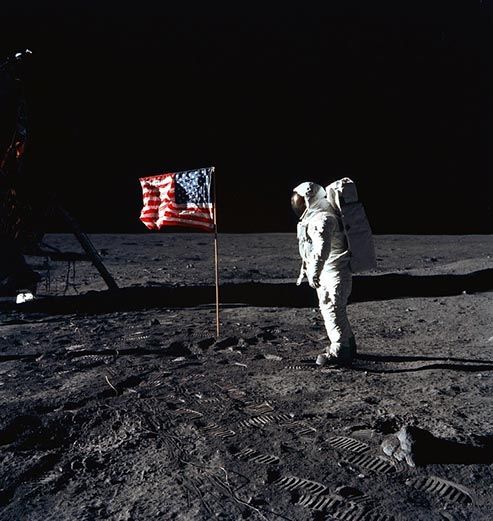 The South Dakota State Historical Society is hosting the viewing of a new documentary about the Apollo 11 moon landing on Saturday, July 20, at the Cultural Heritage Center in Pierre.

“The Day We Walked on the Moon” will be screened four times on that day: 9:30 a.m., 11 a.m., 1:30 p.m. and 3 p.m. CDT. There is no fee to attend, but regular admission fees to the museum will apply that day. The video is being screened in 50 Smithsonian Institution-affiliated museums across the country on the 50th anniversary of the moon landing.

In the one-hour documentary, astronauts (including Michael Collins, the third member of the Apollo 11 mission), members of Mission Control (including Flight Director Gene Kranz, Capsule Communicator Charles Duke and Guidance Officer Steve Bales) and the children of Neil Armstrong and Buzz Aldrin reveal their personal stories behind the scenes of the iconic day.

Pop culture notables like Queen guitarist and doctor of astrophysics Brian May and television personality and professor of physics Brian Cox describe where they were and what they felt during that “one small step.” It’s a story that ranges from the deeply personal to the grand and historic, an in-depth look at one of the most important 24-hour periods in history.

“This event may seem a little outside of our mission, but as a Smithsonian Affiliate since 2013 and a historical organization, we felt that an anniversary of a historic event of this magnitude warranted public attention,” said Jay Smith, museum director. “We have an exhibit on display about South Dakota’s missile field, and we certainly understand the Cold War relationship between NASA and the ‘space race’ to our missile field during this incredibly complex era of our nation’s history.”

Visitors to the Cultural Heritage Center can view the exhibit “Silent Silos: South Dakota’s Missile Field” through February 2021. Regular admission fees apply.  The museum is open from 9 a.m.-6:30 p.m. CDT Monday through Saturday, and 1-4:30 p.m. CDT on Sundays and most holidays. Call 605-773-3458 for more information about exhibits, special events and upcoming activities.