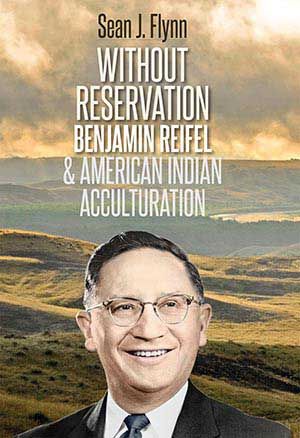 Great American leaders can come from anywhere, including a log cabin on a reservation in Western South Dakota.

Sean Flynn will tell about Ben Reifel at 7 p.m. CDT on Tuesday, July 9, at the Cultural Heritage Center in Pierre. Flynn is the author of Reifel’s biography, “Without Reservation: Benjamin Reifel & American Indian Acculturation.” Everyone is welcome to attend the free program, which is part of the History and Heritage Book Club.

“Reifel was much more than the first Lakota to serve in the U.S. Congress. He fought to advance economic opportunities for American Indians during his career at the Bureau of Indian Affairs and in Congress. He prospered in the American mainstream without forsaking his heritage as an American Indian,” said South Dakota Historical Society Foundation President Catherine Forsch.

The foundation and the South Dakota Historical Society Press, which published “Without Reservation,” sponsor the History and Heritage Book Club.

Reifel was born on Sept. 19, 1906, on the Rosebud Indian Reservation near Parmelee to a Lakota mother and German American father. He earned his high school diploma through a vocational high school on the campus of South Dakota State University in Brookings. He went on to receive his bachelor’s degree from SDSU in 1932 and later earned a master’s degree and doctorate from Harvard University. Reifel began his career with the Bureau of Indian Affairs in 1933. He was elected to the U.S. Congress as a Republican in 1960 and served 10 years. He died in Sioux Falls on Jan. 2, 1990.

Reifel’s illustrious career with the BIA, his being the only Lakota congressman and the only American Indian elected by South Dakota voters to Congress prompted Flynn to write a biography of Reifel.

“Moreover, Ben’s advocacy of a fuller American Indian integration into mainstream society should be a part of current debates over Indian affairs, Indian-white relations and the future of South Dakota Indian reservations,” Flynn said.

Flynn, like Reifel, is a member of the Rosebud Sioux Tribe and graduate of SDSU. Flynn received his doctorate from Texas Tech University and has taught history at Dakota Wesleyan University in Mitchell for 20 years.

Flynn said that researching Reifel’s life caused him to realize that, “Ben was a supremely talented individual who would have succeeded and likely achieved national prominence in whatever field he chose to enter. He was articulate, hard-working, fearless and an astonishingly accomplished leader.”

What he would like people to know about Reifel, Flynn said, was that, “Ben did things his way. He refused to be stereotyped or caricatured. He was unashamedly patriotic. He was an American first and an American Indian second, and he loved his country and his native state.”

The book “Without Reservation” is available at the Heritage Stores at the Cultural Heritage Center and the Capitol and online at www.sdhsf.org.

People may join the program at locations other than the Cultural Heritage Center by calling (605) 773-6006 for more information.