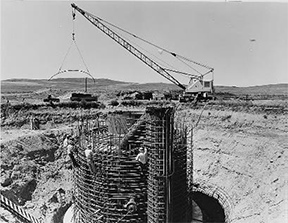 A public reception will be held 10 a.m.-4 p.m. CDT with refreshments and a presentation by Minuteman Missile National Historic Site Superintendent Eric Leonard entitled “The Story of South Dakota’s Missile Field” at 2 p.m. Museum staff from both sites will be on hand to greet visitors and answer questions in the gallery. There is no admission to attend the reception or the presentation.

The exhibit, which will be open through February 2021, is a collaboration with the Minuteman Missile National Historic Site. The two institutions have been working together since June 2018 on the project.

Featuring never-before-seen artifacts from the collections of the Minuteman site and the State Historical Society, the exhibit traces the development of the Cold War-era missile field in South Dakota to house the new Minuteman missile and later the Minuteman II nuclear weapons designed to shield the United States from Russian missiles.

From local protests about land use to the life of the missileers who operated both above and below ground, the exhibit employs photographs, artifacts, music, video, oral histories and interactives that bring this complex story to light. The exhibit includes a 1980s-era video game called “Missile Command,” Civil Defense videos featuring a character named “Bert the Turtle” and political advertisements that serve to remind visitors how the Cold War was omnipresent in American culture of the era.

“It was important to us not to duplicate the exhibit that presently exists at the Minuteman site near Phillip,” said Jay Smith, museum director. “So we worked closely with Minuteman Superintendent Eric Leonard and his staff to ensure that we had a unique story to tell that emphasized different aspects of both the material culture and the human face of the silent silos story.”

Artifacts such as a transport container that once held top-secret control panels, the launch keys that two missileers had to simultaneously turn to engage the warheads and other items will be displayed in the museum exhibit. The exhibit also features oral histories from the missileers who described what it was like to work in the missile field. A menu board from the above-ground barracks will display the sustenance provided the men and women at the site.

“Simply put, this is a complex story worthy of preservation and public attention,” Smith said. “The impact of the missile field on South Dakota history continues to reverberate through the creation of the Minuteman Missile National Historic Site by the National Park Service. The site draws more than 125,000 visitors each year, making it one of the most popular attractions in the state.”

Suggested cutline: A launch control facility in South Dakota is shown under construction. The ground breaking of South Dakota's missile field was Sept. 11, 1961. By 1963 all of the 150 launch facilities (missile silos) and 15 launch control facilities were manned and ready to defend the United States as a deterrent. (Photo courtesy Minuteman Missile National Historic Site)