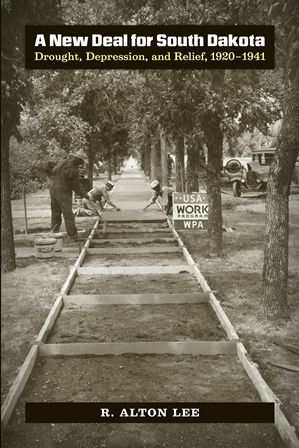 PIERRE, S.D. -- The Great Depression and “A New Deal for South Dakota” will be the focus of a public program at the Cultural Heritage Center in Pierre.

“From drought to grasshoppers, many South Dakotans lived through or grew up hearing stories about the Great Depression,” said Foundation President Michael Lewis. “State Historical Society staff and author Alton Lee will talk about aspects of this era and President Roosevelt’s New Deal, which, at its height, supported nearly half of the state’s population.”

Historic preservation, museum and archives staff will discuss the work of the Civilian Conservation Corps; John and Alan Lomax, who helped catalog songs during the Depression era; and photographer John Vachon and the Farm Security Administration.

Author R. Alton Lee is joining the meeting by telephone to discuss his book, “A New Deal for South Dakota: Drought, Depression, and Relief, 1920–1941.” The book was published by the South Dakota Historical Society Press in September 2016.

Lee is professor emeritus of history at the University of South Dakota in Vermillion. He has written extensively on the political history of the Great Plains. In “A New Deal for South Dakota,” Lee examines the program’s effect on families, farmers, miners, young people, women, American Indians and others in the state. The book is an evaluation of South Dakota’s effort to avoid both starvation and federal dependence as its people endured the worst natural and economic disaster of modern times.

The book is available at the Heritage Stores at the Cultural Heritage Center and the Capitol.