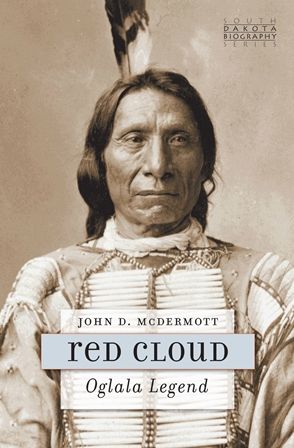 A larger-than-life figure in the history of the West, Red Cloud is the only American Indian leader who defeated the United States Army in a war.

In “Red Cloud: Oglala Legend,” the latest book from the South Dakota State Historical Society, author John D. McDermott examines the Sioux leader’s rise to prominence, his struggle against cultural domination and the victory that closed the Bozeman Trail in 1868.

“With ‘Red Cloud,’ McDermott has used little-known sources to illuminate the early childhood and worldview of this historical legend who lived during a time of great upheaval for his people,” says Jay D. Vogt, director of the South Dakota State Historical Society.

Born in 1821 in present-day Nebraska, Red Cloud fought to keep non-Indian settlers and the United States military out of his people’s territory in 1866–1868. In what would come to be known as Red Cloud’s War, the chief defeated the army but would alter his tactics from armed resistance to a long-term strategy that included diplomacy.

In his latest book, McDermott goes beyond the Oglala leader’s experience as a warrior and focuses on his time as a statesman. Chronicling his diplomatic trips to the United States Capitol, the author examines Red Cloud’s vision for maintaining Oglala life and culture.

McDermott is a research historian who has written numerous articles and books on western history, including “Red Cloud’s War: The Bozeman Trail, 1866–1868” (2011). Now residing in Rapid City, McDermott served as a historian for the National Park Service and a policy director for the President’s Advisory Council on Historic Preservation. He will be speaking at the South Dakota Festival of Books in Deadwood this September. More information about the festival can be found at sdbookfestival.com.