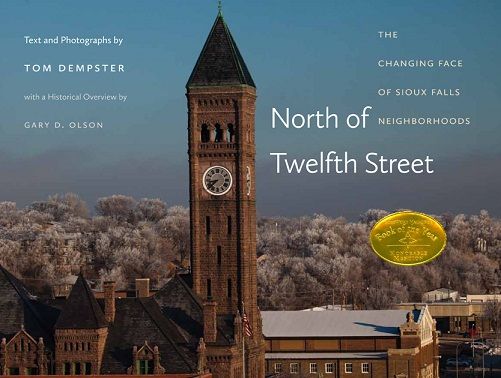 Tom Dempster’s North of Twelfth Street: The Changing Face of Sioux Falls Neighborhoods features the changing landscape of Sioux Falls through Dempster’s beautiful photographs and insights into his hometown. The South Dakota State Historical Society Press published the book in 2012.

"The book is an offering to my Sioux Falls. I am thrilled and thankful for this award," said Dempster.

In North of Twelfth Street, Dempster focuses his lens on the city’s oldest and most diverse districts. With his book, Dempster provides a window into some of the best-known buildings in Sioux Falls and the lives of those who live and work in these neighborhoods. Gary D. Olson places Dempster’s stunning photographs in context with an essay on the area’s historical foundations.

“Tom Dempster has created a superb reference to Sioux Falls, and this honorable mention recognizes the value of his efforts,” said Jay D. Vogt, director of the South Dakota State Historical Society.

Two other State Historical Society Press books—Waiting for Coyote’s Call by Jerry Wilson and A Marvelous Hundred Square Miles by Suzanne Barta Julin—have also been finalists for the ForeWord Reviews Book of the Year Awards.

Dempster, who lives in Sioux Falls, served as a Minnehaha County commissioner for nine years and in the South Dakota State Senate from 2001 to 2010. His photography is found in museums and private collections throughout the region.

Olson is a former academic dean and professor of history at Augustana College in Sioux Falls.

North of Twelfth Street: The Changing Face of Sioux Falls Neighborhoods is available for $34.95 plus shipping and tax and can be purchased from most bookstores or ordered directly from the South Dakota State Historical Society Press. Visit sdshspress.com or call (605) 773-6009.