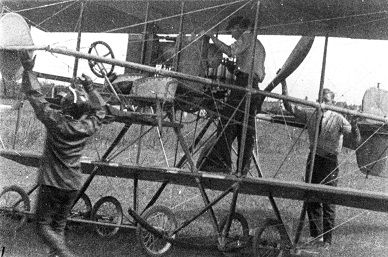 PIERRE, S.D. – Film footage of the 1912 State Fair in Huron, from the collections of the South Dakota State Historical Society-Archives at the Cultural Heritage Center in Pierre, will be the centerpiece of a program airing Thursday night, Feb. 7, on South Dakota Public Broadcasting.

“We were happy to provide South Dakota Public Broadcasting with the 1912 State Fair film and are grateful to them for the great program they’ve put together,” State Archivist Chelle Somsen said.

The 1912 State Fair had approximately 100,000 visitors and ran from Monday, Sept. 9, to Friday, Sept. 13. The film shows fair goers navigating through Huron’s dirt streets next to automobiles and horse-drawn wagons, the fairgrounds with fair buildings and vendors, a merry-go-round, the grandstand and racetrack.

Also shown are a biplane and pilot preparing for takeoff, horse and motorcycle races, and a dance performed by American Indians from the Crow Creek Indian Reservation.

“This is one of the first movies ever shot in South Dakota and it shows people and things in a way that still pictures from the era just can’t,” said Brian Gevik (GEV-ik), SDPB Producer. “It’s especially amazing if you consider that the odds are very much against a 100-year-old film like this surviving this long. It’s been maintained and cared-about for a very long time, and that’s something special.”

A link to the film footage via South Dakota Digital Archives and still images from the 1912 State Fair are found at www.history.sd.gov/archives by linking to “1912 State Fair.”

State Archives staff are available to help assist with research and can be reached at (605) 773-3804 or archref@state.sd.us. For more information, visit www.history.sd.gov/Archives.