In May 2019, with your help, a new exhibit will be unveiled in the Hogen Gallery in the Cultural Heritage Center. The Minuteman Missile exhibit is a collaboration between the State Historical Society and the Minuteman Missile National Historic Site.  The exhibit will tell the history of the Minuteman Missile defense system and the story of the Cold War years in South Dakota. The Cold War was a struggle between the United States and the Soviet Union to decide which of their respective economic and ideological systems would dominate world affairs. The exhibit will address technology and how world politics was impacted by the existence of the missile range in South Dakota.

MUSEUM PROJECT – Goal to raise $36,000
The tentative opening weekend is May 17-19, 2019 and the exhibit will be located in the Hogen Gallery at the Cultural Heritage Center.  Accompanying programming, including a speaker from the Smithsonian’s National Museum of American History, and a celebration of the 25th anniversary of the closure of the missile field is currently in the planning stage. The exhibit will highlight the important legacy of the Minuteman I & II missile field in South Dakota from its controversial roots to its closure – and then its revitalization as a tourism site by the National Park Service.

The missile field was operational, 24 hours a day, seven days a week, for 365 days a year, for thirty years. The exhibit will trace the introduction of the idea of missile deployment in South Dakota through the protests of some landowners who objected to the use of eminent domain to clear the way for missile pad construction, to the economic impact of the missile field on the state economy, the exhibit weaves a story that will serve as a visual narrative of the Cold War in South Dakota from 1960 to the present day. 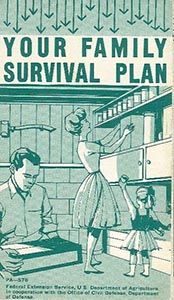 Through artifacts, photographs, oral histories and hands-on interactives, the life of the missileers will be told.  Visitors will be able to see artifacts from the above ground barracks to missile control below ground.  The exhibit will feature such material as the launch keys that missileers would have to use in case of a nuclear exchange. Missileers led a very interesting life above and below ground, developing their own culture including humorous jokes, sayings and decorations that almost certainly deflected the very real pressure of their positions.

The Cold War also had an impact on the culture of the nation, and popular culture of the era will be reflected in music, film, and even in popular video games.  A Missile Command video game from the 1980s will be available in the exhibit, as well as virtual tours of the underground area.  Infamous Civil Defense films of the era included such characters as “Bert the Turtle” who taught school children of the era to “duck and cover” in the event of a nuclear attack near their homes, schools and neighborhoods.

The exhibit will also follow the reasons for the closure of the missile field in South Dakota and its re-emergence as a National Park Service site. Today, nearly 125,000 people stop at the Minuteman Missile site to remember, to teach, and to learn about the role the South Dakota missile field played in the Cold War.

Your support of the exhibit will help make possible the preservation and education of South Dakota history.  Please call (605) 773-6003 to learn more or indicate your level of support below. We appreciate your time and your consideration.

Yes! I want to help make possible the preservation and education of South Dakota history!
Add your name to be recognized.