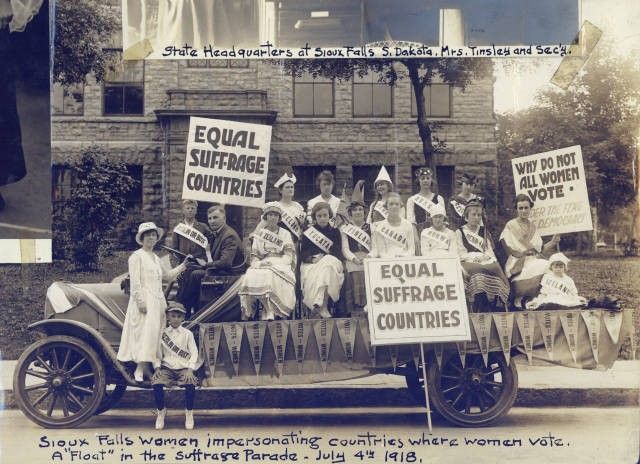 Suffragists impersonating countries where women have the right to vote. Sioux Falls, SD

Celebrating courageous suffragists who made votes for women possible

We are approaching the 100th anniversary of the passage of the 19th Amendment granting equal voting rights for women in the United States.  Help us to tell the story of the courageous suffragists who made votes for women possible. To celebrate the anniversaries of women gaining the right to vote, we have launched a statewide women's history initiative caller Her Vote. Her Voice. that explores the generations-long fight for universal woman suffrage.

ABOUT  Her Vote. Her Voice. (HVHV) is a project of the South Dakota Historical Society Foundation. To lead the HVHV initiative, a Delegation was appointed by Governor Kristi Noem to celebrate the centennial anniversary of the passage of the 19th Amendment. For more details about our events and updates on our projects visit Hervotehervoice.org

VISION  The Women's Vote Centennial Delegation is designed to serve as a communications center for the collection and dissemination of information about South Dakota events, plans, and resources for the centennial of the 19th Amendment.  This diverse group of nonpartisan professionals brings relevance to the historical topic while also being a connector to the present that history is happening and is being made still today.

GOALS Our goal is to raise $1 million by January 2021 with the South Dakota Historical Society Foundation to support South Dakota women's history projects.