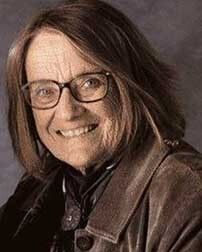 Cattle, kids, cowboys, cowgirls and living on the land have made up Linda Gilbert’s life.  Born in Valentine, Nebraska the third of five children to Ken and Ruth Hallligan, Linda began life at Parmelee, South Dakota on the Halligan ranch.  As Ken and Ruth moved to manage the Rankin Ranch in Stanley County, South Dakota and eventually ended up in Jones County, South Dakota, Linda rode along with siblings and parents to help on the ranches.  She attended grade school at the Tomahawk Country School and graduated from Riggs High School in Pierre, South Dakota. Her love for history and awareness of the world began with her parents and the many instructors while in the Riggs School system.  While attending SDSU in Brookings, Linda met her husband Ray Gilbert and so began their life together in Harding County at Buffalo, South Dakota. Ray and Linda moved home to Buffalo to run the Gilbert Angus Ranch as the fourth generation of Gilbert’s on the ranch. They added the fifth generation with their daughter, Andrea and son, Lloyd.  Now the sixth generation is active with granddaughter, Sawyer and grandson, Grey.  Lloyd and his wife, Patty are managing the ranch along with Ray and Linda.

Linda has often expressed her philosophy of running a family corporation.  She believes each generation is the caretaker of the operation.  They hold it for the next generation.  As a caretaker, she has held many roles to achieve success and longevity for the Gilbert Angus Ranch.  She works cattle, cooks for crews, runs equipment and advocates for the beef industry as a spokesman in various organization.  Along with those responsibilities, Linda finished her Elementary Ed degree from BHSU in Spearfish, South Dakota to teach school in Harding County.  The economic stress of the 1980’s in agriculture made it necessary to add to the income of the family ranch.  Teaching fifth grade was one of the most rewarding occupations Linda experienced.  She has also been active in South Dakota High School Rodeo as an Executive Director, served on the Cattlemen’s Beef Board as a representative of South Dakota, served as Director in South Dakota Stockgrowers, represented Harding County on the Public Lands Council, worked on various local organizations, and was a director on the South Dakota Grasslands Coalition. A lifelong learner, Linda enjoys learning and advocating for the people on the land in South Dakota.